Chief Tivoli Faaumu and the Executive Staff with the Maui Police Department hosted a Medal of Valor ceremony honoring three officers for outstanding performance while on duty.

Officers Rusty Iokia, Lucas Hetzler and Herman Marfil were honored for their role in response to a structure fire on Kea Street in Kahului on May 4, 2015.

Upon arrival on scene, officers found the front half of the residence engulfed in flames and smoke.

Officers Iokia and Marfil, were credited with entering the burning residence to ensure all had been evacuated after learning that there was a possibility of an occupant being trapped inside. “The went through thick dark smoke which hampered their vision and breathing.  Undaunted by the danger, they remained in the house, attempting to find anyone who may be injured,” said Lieutenant William Juan who recapped the incident during today’s awards ceremony.

“They continued towards the back of the residence, despite the intense heat which had melted a shed nearby,” said Lt. Juan.  Police say both assisted with the rescue of two dogs trapped in a kennel in the back yard.

Officer Hetzler, who also responded to the scene, heard a woman calling for help and was able to locate her.  Police say the woman was trapped in the back yard and was within 10 feet of flames.  As Officer Hetzler was making his way to the woman, Officer Iokia broke through a fence and assisted his fellow officer in getting the woman to safety.

Maui police also honored Kahului resident Mulimuli Agalevaa with a Civilian Award for assisting first responders by using a water hose to spray down the east side of the home in the hopes of slowing the fire.  “As he was spraying down the house, he saw two men climb over onto his property and noticed a dog that was stranded on a kennel roof. He jumped over the fence and moved the dog to safety,” said Lt. Juan.

“If not for the selfless, brave actions,” of the officers and civilian Mulimuli Agalevaa, Lieutenant William Juan said, “this incident could have had a tragic outcome… The efforts of these three officers stood out as they went above and beyond the normal performance of their duties,” he said.

Another presentation for the Civilian Certificate of Merit was issued to Mākena resident Patrick Borge.

On May 22, 2015 at 8:16 p.m. police received a call that an individual had fallen into the ocean and was being battered by the waves and lava walls at the end of Mākena Road.  Unable to describe the exact location to dispatchers, police contacted Borge.

“Mr. Borge has consistently and repeatedly been our eyes and ears for dispatch for the Mākena area,” said Dispatch supervisor Davlynn Racadio during today’s award ceremony.

Borge searched the area prior to police arrival and confirmed that the victim’s vehicle was in the parking lot outside of the Mākena Stables.  “When we described where they were telling us they were at, he (Borge) knew almost immediately, and told us it’s way in there, about a mile past the end of the road,” said Racadio.

He then advised authorities that the police, fire and medics would not be able to travel the road, and assisted by providing emergency responders with two ATVs.

“This is just our way of saying thank you.  Thank you to our community.  Thank you to people like Mr. Borge who have consistently helped dispatch to locate our victims or people that need help,” said Racadio.

“Without his help that night and all the previous times we’ve counted on him to help us, we would like to say thank you,” she said. 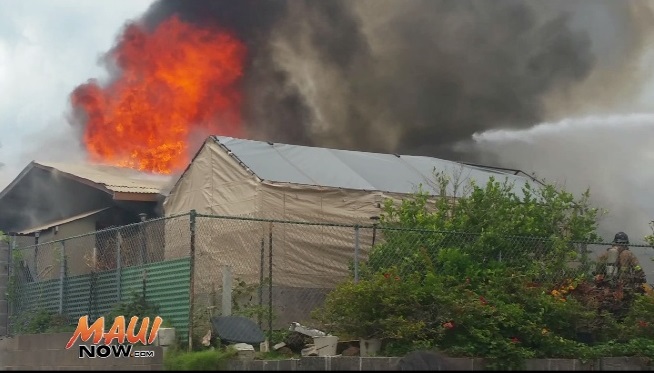 Medal of Valor. Past award recipients. Photo by Wendy Osher.