U.S. Rep. Tulsi Gabbard announced her decision to run for President of the United States on the Van Jones Show on CNN. The interview was taped on Friday and aired on Saturday afternoon.

Jones asked, “There are some common sense ideas like this, technology, innovation, but it’s hard to get them done with the existing arrangement. Are you gonna run for President of the United States and do something about it?”

To cheers from the studio audience, “I have decided to run and will be making a formal announcement within the next week,” Gabbard said.

“There are many reasons for me to make this decision. There are a lot of challenges the American people are facing, that I’m concerned about and I want to help solve. Issues related to making sure people who are sick get access to the healthcare they need, making sure that people who are stuck in our broken criminal justice system and the families that are torn apart are being helped, are being served–making sure we’re taking action to protect our planet for us and for the future. There’s a whole host of issues that I’m looking forward to addressing.

But there’s one main issue that is central to the rest, and that is the issue of war and peace. I look forward to talking about this issue in depth when we make our formal announcement.” 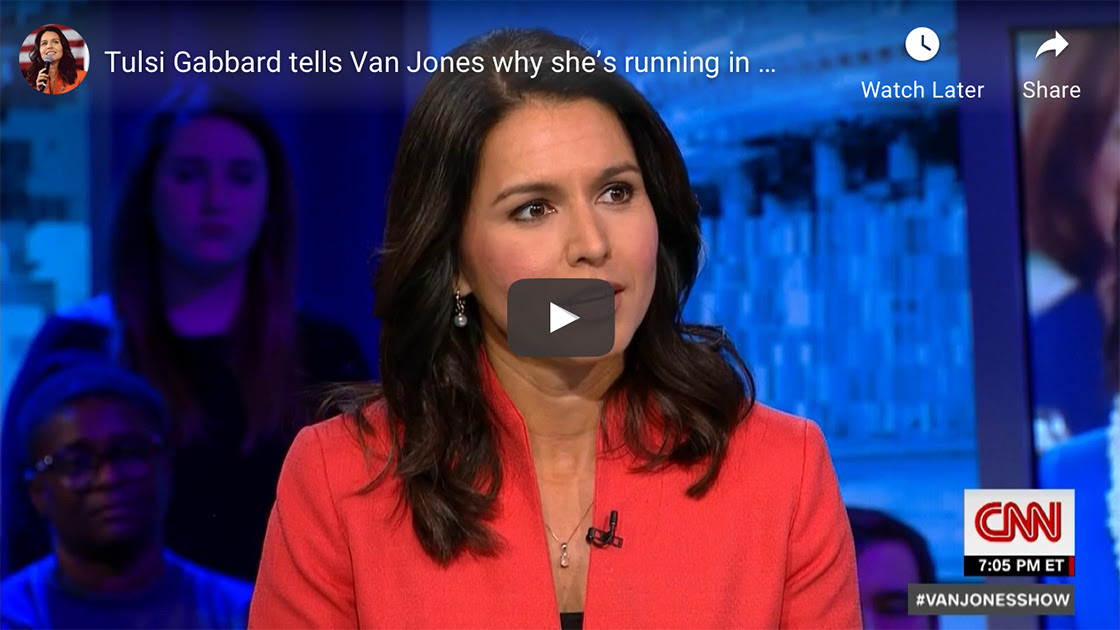 Plans for Rep. Gabbard’s official launch will be announced soon.

Tulsi Gabbard is a Democrat who was first elected to Congress in 2012 to serve the people of Hawaii. She is currently a member of the Committees on Foreign Affairs and Armed Services. She deployed twice to the Middle East, and was one of the first female combat veterans ever elected to Congress. She continues to serve as a Major in the Army National Guard. Tulsi Gabbard was Vice Chair of the Democratic National Committee from 2013 until she resigned in 2016 to support Bernie Sanders in his bid for President. Tulsi Gabbard announced her intention to run for President of the United States on January 11th, 2019. She does not accept campaign contributions from corporations, lobbyists or political action committees.