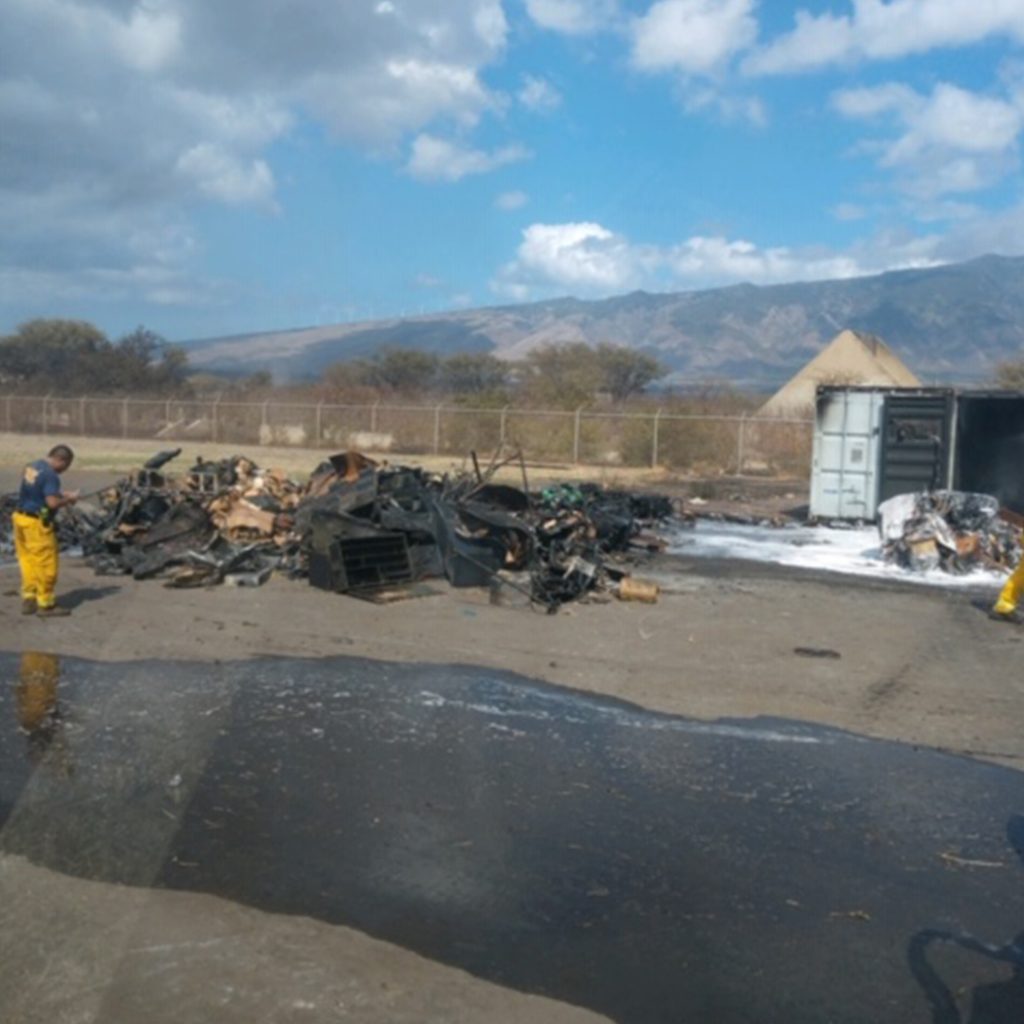 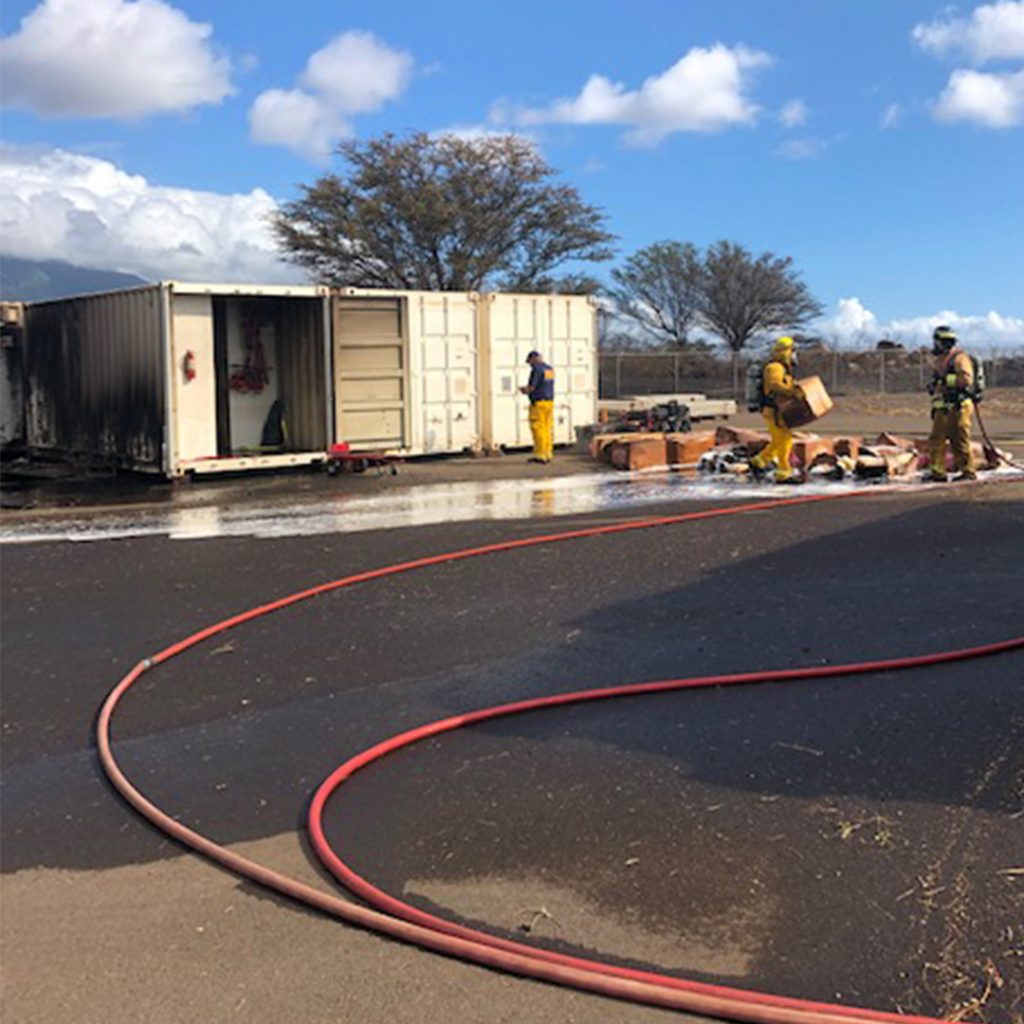 Army officials said they discovered the damage when someone saw flames licking out from within the containers at 5 a.m. 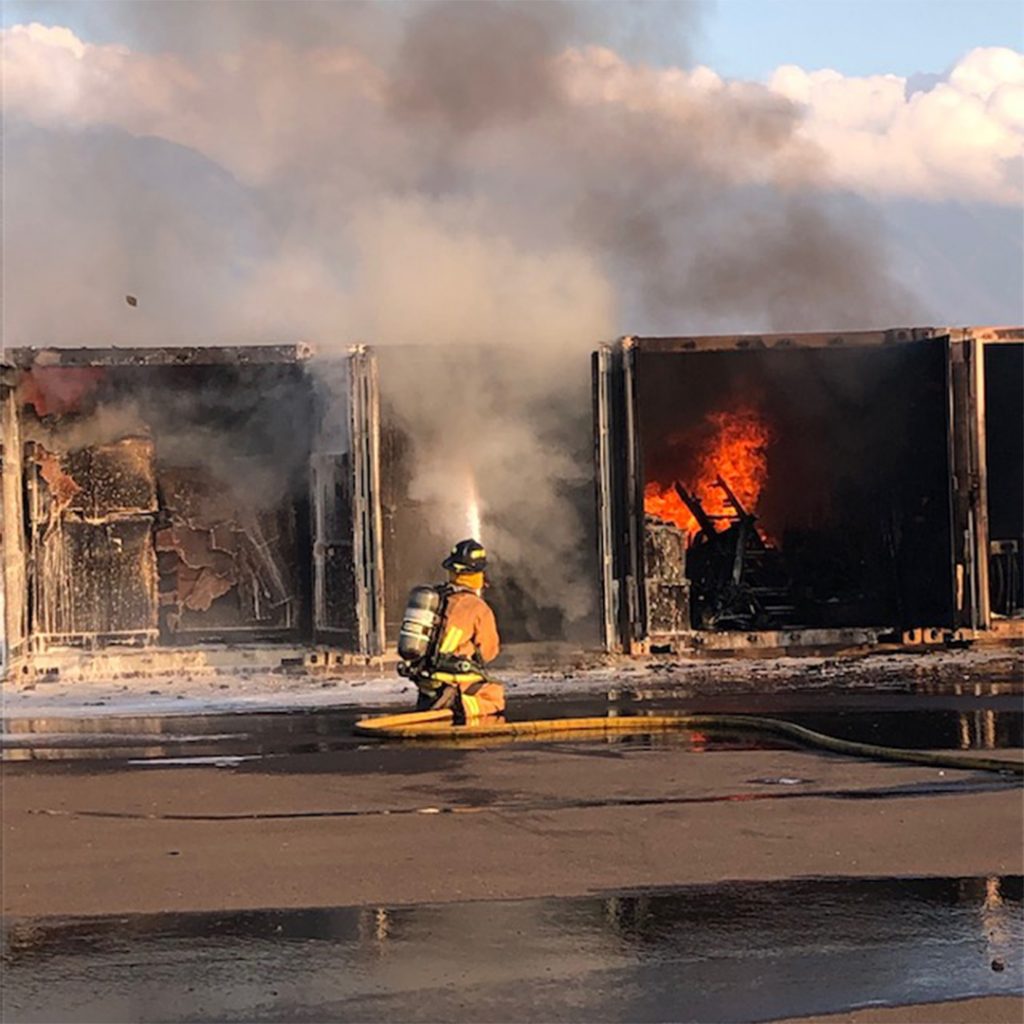 “It was pretty bad,” said Sgt First Class (SFC) Brandon Cabanilla. “The fire started from the inside because of the heat. The contents just ignited.”

Cabanilla said nine of the shipping containers had construction materials belonging to the Army National Guard, and five were FEMA containers filled with shelter supplies such as cots and blankets.

As of this time the Army National Guard has no estimate for the value of the containers or its contents.

The Armory sits behind Maui Raceway Park along Maui Veterans Highway. Police closed the highway Thursday afternoon after flames from the brushfire made it too hazardous to drive because of the smoke and heat.

Then shortly before 6 p.m. police reopened the town-bound lanes to allow those trapped in Kīhei to get out and head towards Kahului.

“There were fires burning on both sides of the highway, you could feel the heat,” said Oʻahu resident Laura Blaho. “Traffic was super backed-up.”

Motorists heading in the opposite direction were unable to drive into Kīhei until several hours later, when North Kīhei Road and Maui Veterans Highway opened up all lanes of traffic. They said by then the fires near the armory were going strong.

“East side of the highway by the armory it was smoking and flames were 10 to 12 feet high, it was crazy,” said Kīhei resident Tracy Bennett. “I made it home at midnight and this morning there was an inch of ash everywhere.”

For about two hours Thursday the Kahului Airport diverted flights from Maui due to the airport being on generator power and because a number of passengers could not make it to the terminal in time for their flights, due to the road closures.

Those catching flights to Maui said all seemed well as they departed from Honolulu International Airport. However it was a different story as they got closer.

“I saw the smoke and fire and my reaction was ‘Oh my God,'” Wailuku resident Ken Esclito, who caught a 7 p.m. flight from Oʻahu back to Maui. “You could see how it was burning towards upcountry and towards Kīhei and I was like, wow.” 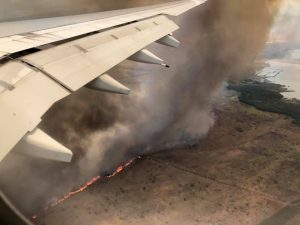 My biggest concern was the power plant because you lose that and then what do we do?”

Maui Electric Company (MECO) estimated that flames from the brush fire got about 150 feet within their Māʻalaea Power Plant yesterday. 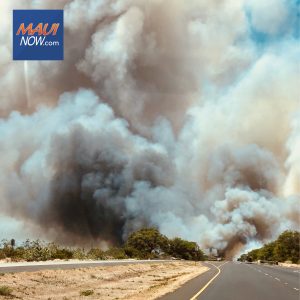 “It was a very serious situation,” said Mat McNeff, Director of Maui County for Maui Electric.

However, because the Māʻalaea plant is equipped with it’s own fire hoses, water tank, fire breaks small army of personnel, McNeff said on a scale of one to ten the danger posed by the fire to the facility was around a “five.”

“I was less concerned about the damage to the facility than I was the safety of our employees,” he said.

McNeff said the plant was protected by a number of Maui fire fighters, as well as state Department of Land and Natural Resources personnel and power plant staff. The only damage the flames caused to the plant was a transmission line, however McNeff said customers wouldn’t have noticed any loss in service due to “redundant systems” in place.

The Māʻalaea Power Plant provides 80 percent of the firm power supplied to Maui’s 65,000 customers. There are 21 generators total at the plant, some larger than others that would have caused more serious problems if damaged.

“As long as it’s not the largest one (generator) … generally speaking we have more generation than is required to meet the load,” he said.

MECO on Friday asked Maui customers to conserve power between 5 and 9 p.m. – the peak hours of energy use – due to the damage sustained by the electrical grid. Suggested conservation steps included “turning off or lessening the use of air conditioners, delaying hot showers, laundry, dish-washing activities and minimizing cooking until later in the evening.”

“We thank our customers for their understanding and cooperation as crews make their repairs,” McNeff said.