A public march in support of the protection of Maunakea and in solidarity with the groups identifying themselves as kiaʻi, or protectors, takes place this Saturday, Aug. 10 in Kahului.

The “Kapu Aloha Unity March” starts at the War Memorial Stadium at 8:30 a.m. Following pule and oli, participants will walk from the stadium to the University of Hawaiʻi-Maui campus.

According to organizers, the march is a demonstration of the strength of unity through Kapu Aloha.

Shuttle service to the stadium from UHMC will be provided by Akina’s Transportation. Shuttles begin at 7 a.m. at UHMC, with the last shuttle scheduled for 8:15 a.m. A short program will follow the arrival of marchers on campus.

Kahoʻokahi Kanuha, who is among the vocal leaders of the movement at Maunakea, is scheduled to be a featured guest speaker. Speakers will also include Tiare Lawrence, Kaleikoa Kaʻeo, Kahele Dukelow and Keʻeaumoku Kapu.

Music by the Sons of Yeshua, known for their music about the protection of Maunakea, will greet marchers at arrival to the campus.

Motorists are advised to expect temporary delays as the Kapu Aloha Unity March proceeds out of the War Memorial Stadium parking lot and travels along Kanaloa Avenue and Kaʻahumanu Avenue towards UHMC.

“This is a unifying time for Maui, all are welcome in Kapu Aloha to gather and walk together to show our solidarity with kiaʻi, protectors of the mauna,” said march organizers Mahina Martin, Luana Kawaʻa, Koa Hewahewa and Torie Hoʻopiʻi.

“The march highlights Kapu Aloha in recognition of the higher standards kiaʻi are committed to in their efforts to protect Maunakea,” according to event organizers.

Marchers are asked to reflect the practice as well through “peaceful and respectful participation.” The march and the program that follows is a smoke, drug and alcohol free event.

The march comes as a demonstration enters week four at the base of Maunakea Access Road on Hawaiʻi Island where groups identifying themselves as protectors say they believe construction of the Thirty Meter Telescope project would result in further desecration of a mountain they consider to be sacred.

Backers of the telescope meantime, say they believe in the co-existence of culture and science atop the mountain. 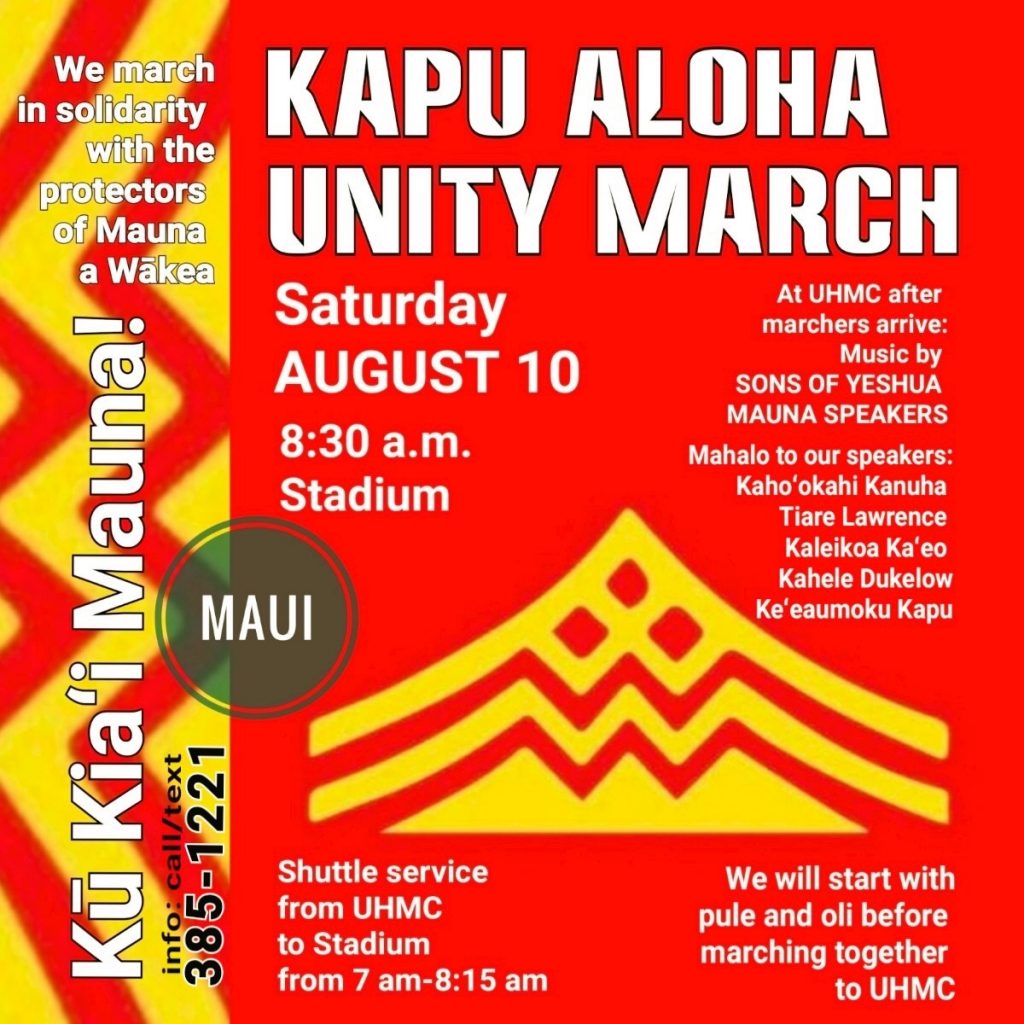