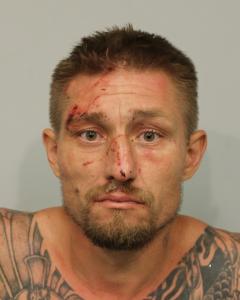 On Thursday afternoon, Aug. 22, at 1:30 p.m. detectives from the Area II Criminal Investigations Section charged Ham with a total of 39 counts including the following crimes:

Hams is currently being held at the Kona Police cellblock without bail on a probation violation charge. Bail was set at $812,000 on the remaining charges. His initial court appearance is set for Friday morning (Aug. 23) in Kona District Court.

South Hilo patrol officers responded Wednesday morning to an 8:19 a.m call of a possibly mentally unstable man at a hotel on Banyan Drive in Hilo. Police say the person reporting the incident stated that the suspect may be armed with a firearm and was operating a dark colored Honda SUV.

Officers were initially not able to locate the suspect, but found him just after 9:20 a.m. in the area of the hotel on Banyan Drive.

Police say the driver of the vehicle refused to stop, and officers did not continue pursuit out of concern for public safety.

A short time later police responded to a call of a traffic accident with the same suspect vehicle and a dark colored Toyota truck at the intersection of Komohana Street and West Kawailani Street in Hilo. The driver of the Toyota truck was not injured in the accident.

At about 10:50 a.m. Kaʻū Patrol officers received a call reporting a man in his mid to late 20’s, with no shirt and numerous tattoos walking on the side of the road just south of the Naʻalehu Police Station carrying a firearm. Police said this description matched that of the earlier call of a possible mentally unstable man from Hilo.

At about 10:52 a.m. Kaʻū Patrol officers responded to a report of a State of Hawaiʻi truck that was stolen from the State Highways base yard in Kaʻū. The State truck was driven through several gates before heading out of the base yard, according to department reports. The dark colored Honda SUV wanted in the earlier traffic crash involving the “mentally unstable male” call from Hilo was also located in the Kaʻū State Highways base yard.

At about 11:36 a.m. the same suspect reportedly robbed a gas station at gunpoint near the 110-mile-marker on Route 11. He then left with an undisclosed amount of currency, according to police. No one was injured in the robbery.

At about 12:01 p.m. the stolen State vehicle was located by police in the area of Ahulani Street in Kailua-Kona. The suspect then fired a firearm out of the window of the vehicle and fled the area, according to department reports. Police say no one was injured in that shooting.

At about 12:13 p.m. the suspect in this case headed to a retail establishment on Makala Street in Kailua-Kona where he attempted to enter the locked front door, police said. He then fired a round into the store shattering the locked glass door, according to department reports. Once inside the store the suspect removed several items and fled the area, according to police. No one was hurt in the robbery.

At about 12:18 p.m. the suspect reportedly struck several vehicles at the intersection of Kuakini Highway and Hualalani Road.

At about 12:24 p.m. the suspect in this case reportedly attempted to steal a car at gunpoint from a female party at a gas station on Lako Street in Kailua-Kona. He was unsuccessful in his attempt but was subsequently able to steal another vehicle, a dark colored SUV, at gunpoint from a another female victim at the same gas station, according to police. No one was harmed in this vehicle theft.

At 1:39 p.m. the suspect was arrested by members of the police tactical team. No one was hurt during the incident and arrest.

The suspect has been identified as 38-year-old Joshua Hams of Kailua-Kona. He was arrested for multiple felony offenses.

In responding to this incident not all the reports were coming in the order they occurred and there were delays from the time of occurrence to the time reported to central dispatch. The above information represents a preliminary timeline gathered after the suspects arrest.

This case is being investigated by the Area II Criminal Investigations Division and police ask that anyone with information call Detective Pernell Hanoa at (808) 326-4646, ext.281, or via e-mail at [email protected].

Tipsters who prefer to remain anonymous may call the island-wide Crime Stoppers number at 961-8300 and may be eligible for a reward of up to $1,000.00. Crime Stoppers is a volunteer program run by ordinary citizens who want to keep their community safe. Crime Stoppers does not record calls or subscribe to any Caller ID service. All Crime Stoppers information is kept confidential.