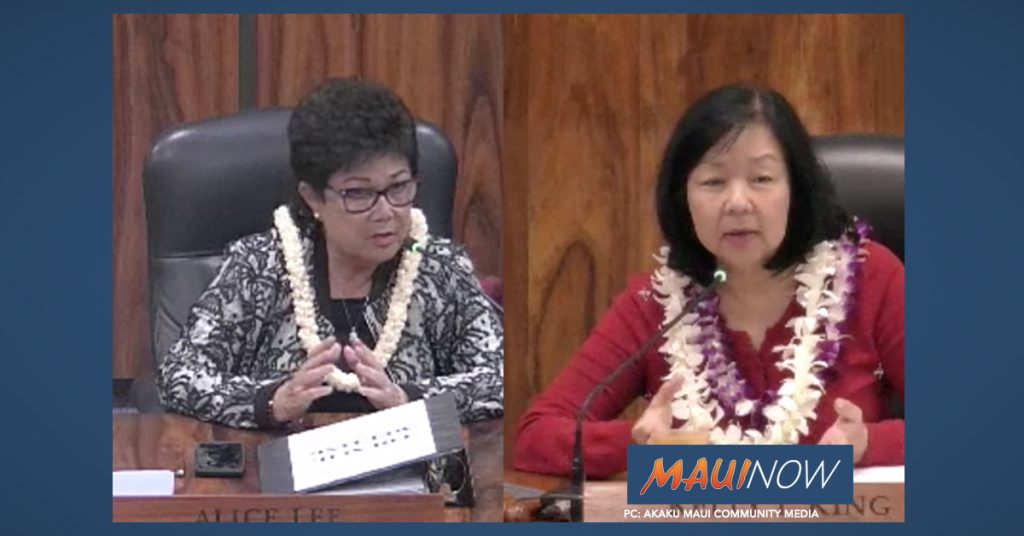 The Maui County Council voted 7-2 on Friday in favor of changing council leadership from the current chair, Kelly King, to the selection of Alice Lee, who will take over chairmanship on Jan. 2, 2020.

Sinenci said he voted for King because of her values of aloha ʻāina and intense love for the land.  “I appreciated your focus on legislation and bringing that vision in Maui County and beyond–making sure our presence is known at the legislature,” he said.

Sinenci also credited King for her “checks and balances on the governmental system,” saying “if anyone held the administration accountable, it was you.”

Lee offered King thanks for her leadership saying,  “In particular, I’d like to highlight the fact that you have conducted yourself in a very professional way today.  I appreciate your graciousness and I thank you for the seamless transition that’s about to happen.”

King responded saying, “For myself, I understand a lot more than probably what the public understands about what’s going on behind the scenes; and I accept that this council or the majority of this council has made these decisions.”

King continued with more pointed remarks saying, “I’m hoping that you won’t take this personally, Councilmember Lee, but I have a really hard time thinking about voting for somebody to lead this council who has not supported this council’s vote on the Hawaiʻi Wildlife et al vs. County of Maui case.”

“I would hope that we would have a chair who would fight for us–who, even if you don’t agree with us, you would see that the majority of the vote is the voice of the council and that you would have supported us getting clarity,” said King.  “I have a lot of issues with those on this council who would abdicate our authority to the mayor.  So I won’t be voting in favor of you, but I understand you have the votes and I will pledge to work with you as the chair.  I just can’t, just in respect to the public, I can’t support that in our leadership,” she said.

Lee responded saying, “I accept that madame chair.  You and I disagree on a variety of issues, but what I think I bring to the table is a collaborative type of leadership. I love our staff.  I will support them as strongly as I can. They need, to me, direction, support, resources and I’m more than willing to commit to that. And I, as far as issues are concerned, we’ll always disagree; but I think my management style is more unifying.”

King responded saying, “That is her opinion, but I’ll accept it. I think my relationship with our staff speaks for itself.”

Following the vote, audible dissent was heard from the gallery including comments from one individual saying, “Shame on this council.”

Sinenci said he shared the same sentiment as many of those who testified on Friday in support of King saying, “I think their testimony was spot-on and from the heart.”

In backing King, testifier Gail Swanson said, “She walks the talk more than anyone I know. She spends all of her time dedicated to what she believes in. She doesn’t waste time. She doesn’t dance around the drama.  She gets stuff done and that’s why I voted for her… we need you where you’re at.  If you need to step down for personal reasons, I get it, and I hope whoever takes over is even a fraction of as good as you are.”

While King suffered some personal losses recently, including the passing of her father earlier this month, she did not name that as a driving reason for her decision to step down as chair.

“I don’t know if there’s drama behind the scenes, but I don’t really care. I just want the best person in the job, period,” said Swanson who described King as “ethical, professional,” and “a bad-ass truth teller.” Swanson continued: “You say it how it is and sometimes people don’t think that’s sugar coated enough.”

Others who spoke in her favor called King “A doer,” and “someone who gets things done.”

Longtime resident Annie Nelson who has served in businesses and on boards with King said, “My vote for Kelly was for an effective person.  Having her step down, if rumors are true… I didn’t hire her to be Mrs. Congeniality, I hired her to get stuff done and voted for her for that reason. And she’s doing it,” said Nelson who compared the situation to “winning the Super Bowl and having the coach step down.  Why would we do that?”

“If she’s being pressured because of an old little boy’s network or whatever it is, that’s unacceptable,” said Nelson.  “If she was a man doing what she’s doing, you would all be lauding her for being so effective.  She’s a woman and we get things done and she has proven that… Either we evolve or we don’t exist anymore… If this is a whole bunch of high school stuff and about personalities, enough.”

In a prepared statement, King said much has been accomplished during the past year.  She commended her staff for keeping up with the heavy load of continuing to serve the community at full pace while taking on the daily duties of the chair’s office.

King said, “We have been laser focused on our commitment to the citizens of Maui to concentrate on the big picture  issues while creating fair practices and procedures, encouraging widespread civic engagement, supporting honest and transparent meetings and keeping an open communication with the public.”

She also made mention of her working relationship with the Office of Council Services, describing the interaction as “productive” and “extremely congenial.”

“Although I had intended to serve as chair for the full term, I respect the decision of the council majority.  To me, leadership was never about the title, and as your council member, I remain committed to lead by example, focus on the longterm vision, prioritize important issues and always serve the public interest first,” said King.

In her statement, King spoke to a lengthy list of priorities and protections accomplished during her time as chair, most notably adding funds to affordable housing and bringing climate change to the forefront:

“There’s also a renewed push to prioritize housing for the lowest income population and I hope 2020 will see new approvals in addition to the north Kīhei and West Maui 100 percent affordable housing rental projects in the attempt to increase availability of rentals.  The council codified in ordinance, a 2018 charter amendment allowing fines of up to $20,000 to be levied on Illegal Transient Vacation Rentals.

“The visionary 2020 budget also includes appropriations of $700,000 and $500,000 for shoreline retreat.  On May 17, the council adopted Resolution 19-98 to approve Maui County’s membership in the County Climate Coalition and affirm Maui’s commitment to the Paris Climate Agreement.

“In June, we hosted the Hawaiʻi Association of Counties conference, which was an historic effort to focus the attention of local officials from across the state on climate and environmental issues… and Maui launched the Hawaiʻi chapter of the Climate Reality Project.

“On Sept. 20, the Council adopted Resolution 19-157 to recognize the efforts of Maui County residents to highlight climate change and support the global climate strike occurring on that date.

“Also on Sept. 20, the council’s most globally significant issue of the decade, we voted to approve a new settlement agreement for the Injection Well lawsuit–Hawaiʻi Wildlife Fund et al vs. the County of Maui.  The vote to also withdraw the case from the Hawaiʻi Supreme Court was monumental and it addressed the will of Mauians to focus our funds on solutions rather than attorneys.  It also highlighted the Charter crisis that resulted from Corporation Counsel’s inability to uphold the council’s vote and the need for clarity on the council’s authority to settle such a case.  I think the private citizens who are going to court to get that clarity when the Maui County Council failed to approve our own special counsel to do it.

“On Oct. 4, the Council adopted Resolution 19-166 to approve inclusion of the state bill in the 2020 Hawaiʻi State Association of Counties legislative package to more urgently address sea level rise.  Specifically, the bill would increase funding and direct the Hawaiʻi Climate Change Litigation and Adaptation Commission to counter the impacts of Sea Level Rise, identify critical public infrastructure in impacted areas and provide policy direction to the legislature about how to move forward with concrete actionable strategies.

“Our council recognized the climate emergency by adopting Resolution 19-209 on Dec. 20, calling for a just transition to a safe climate.  And today we created a new committee on Climate Change and Resiliency to work on policies toward real solutions. (It’s now called Climate Action and Resiliency).  I gratefully accept the responsibility to chair this committee and am excited to get it going.

“Also this month, the council approved a new ordinance allowing traffic police to tow cars in cases of arrest as part of a movement to decrease alcohol and traffic related deaths.  And our legislative package officially supports the proposed state legislation to decrease the legal blood alcohol limit from .08 to .05 percent.”

The motion to oust King was made by Tasha Kama and seconded by the current Vice Chair Keani Rawlins-Fernandez.  Kama said, “For this council, it’s time to do what they believe is right.”

Councilmember Mike Molina thanked King for her service and pointed towards both successes and disagreements saying King took on tough issues and gave her credit for that.  He revisited his message on inauguration day, taking the opportunity to remind everyone “that the chair serves the body, facilitates, keeps and open ear and hears everyone’s concerns.”

Going forward, King will chair the newly created Climate Action and Resilience Committee, which will have seven members after Councilmember Mike Molina asked that he be removed due to work load.

Molina said that although he has championed environmental legislation in the past like the plastic bag ban, his decision to remove himself would allow him time to conduct site visits and dedicate more time to other committees.  Councilmember Yuki Lei Sugimura volunteered to remove herself as well to make the membership an odd number for voting purposes.

Maui Mayor Michael Victorino announced his disapproval of Bill 59 last week, citing concerns over what he called “the potential negative consequences of the proposed tax classifications and a lack of understanding by taxpayers.”

The council finalized the establishment of eight standing committees and their membership which include:

Details of the draft will have to be ironed out in a future meeting since the current draft does not include information on auto referrals and what to do when disposing of matters.  Council staff said the revisions would help guide the council when new resolutions surface and provide direction for standing committees to schedule informational presentations.