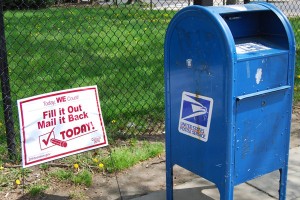 A music video featuring celebrities from the Native Hawaiian and Pacific Islander (NHPI) communities that will be released this week is hoping to raise awareness on the U.S. Census.
On Friday, leaders from the U.S. Census Bureau and the Kālaimoku Group, a Native Hawaiian-owned marketing agency based in Honolulu, joined for a briefing on the 2020 Census and the special campaign to reach and count more NHPI communities.
Officials from the U.S. Census Bureau say they are rolling out an unprecedented communications campaign to reach everyone living in the United States with information on how the 2020 Census is “easy, safe and important.”
One part of the campaign is paid advertisements that officials say are “informed by extensive research and customized to reach multicultural and hard-to-count populations.”
“We are especially excited as this is the first time we’ve engaged a Hawaiian-owned marketing agency to help inform our communications efforts with the NHPI community,” Los Angeles Regional Director Julie Lam said in a press release.
The U.S. Constitution mandates that a census of the population be conducted every 10 years.
Census Bureau population statistics inform how hundreds of billions of dollars in federal funds are allocated for public services like healthcare clinics, schools and education, and roads and bridges.
The 2020 Census will also determine how many seats each state gets in Congress and guide the drawing of local political boundaries.
Lam also provided an update on the recruiting for the 2020 Census operation emphasizing the importance of hiring census workers to work in the communities in which they live.
“We are offering competitive pay, flexible schedules, and the opportunity for individuals to make a difference in their own communities for the next ten years,” Lam added.
For more information on how to work on the 2020 Census, click here.
Census officials say that most households will receive an invitation to participate in the Census by mail in mid-March. Those interested in participating may respond online, by phone, or by mail.
This is the third decennial census to include a dedicated advertising and communications operation.
In the 2000 and 2010 censuses, the Census Bureau also used advertising, partnership, and communications campaigns to increase awareness and participation in the count.
Higher self-response rates increase the accuracy of the census and save taxpayer money by lowering census follow-up costs for nonresponding households, according to Census officials.