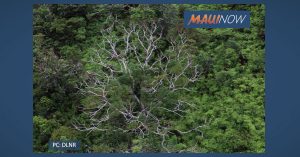 Hawaiʻi Department of Land and Natural Resources officials say the 2020-2024 update to the original strategic response plan for the fight against Rapid ʻŌhiʻa Death notes many challenges ahead.

Released on Monday, the plan calls for additional funding of $4 million, each year, over the next five years to continue progress toward addressing the widespread fungal disease.

The plan was developed in stages, beginning with a progress review and discussion at the Rapid ʻŌhiʻa Death Science Symposium in May 2019 on the University of Hawaiʻi Hilo campus.

The ROD Strategic Response Plan describes the need for continued emergency response efforts as well as for the long-term health of Hawai‘i’s forests.

Additionally, the plan details understanding of the disease and the microscopic fungi that cause it. This understanding of biology, impact and movement in individual trees, and dispersal patterns and mechanisms has improved through significant investments in time, energy, and resources in research, that were prioritized in large part by the ROD Science team.

The disease had only been detected on Hawaiʻi Island until it was detected in limited areas on Kauaʻi, Oʻahu and Maui over the past two years.

“The current status and distribution of the disease has also broadened our recognition that each island mush have adequate capacity for actions across the detection and response spectrum and that the needs for research, tools and management also differ,” The Strategic Response Plan team reported.

The team recognized that public engagement and outreach efforts have proven invaluable in developing broad awareness of the disease, its impacts to native forests and watersheds, and how to protect ʻōhiʻa. They conclude that all efforts can and must continue in order to protect, as fully as possible, Hawai‘i’s critically important, ʻōhiʻa-dominated native forests.