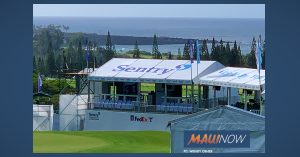 The Sentry Tournament of Champions has generated more than $6.6 million for community charities since it moved to the island in 1999.

“It’s truly a pleasure to thank our fans, sponsors, tournaments, players and volunteers for helping us generate over $3 billion for charity and positively impact millions of lives,”

“As remarkable as this milestone is, what really matters are the countless stories like Amy’s [Bockerstette] that every tournament has. Together, we look forward to continuing to reach – and celebrate – millions more.”

In the Maui community, Matt and his mom Debbie are two of those millions. Matt is a member of Ka Lima O Maui, one of the tournament’s designated beneficiaries, which is a community-based vocational rehabilitation program providing job training and employment opportunities for adults with disabilities.

With the help of Ka Lima O Maui, Matt has overcome severe anxieties, built his self-confidence and currently works for the organization that changed his life.

The PGA TOUR and its more than 100 tournaments across all Tours achieved the $3 billion mark just six years after surpassing $2 billion in 2014.

In addition, the record $204.3 million in 2019 bests the previous record of $190 million in 2018. The TOUR’s first charitable donation of $10,000 was at the 1938 Palm Beach Invitational. These dollars impact more than 3,000 nonprofits each year, such as the First Tee, which was introduced more than 15 million young people to its character-building programs through the game of golf.

Each PGA TOUR tournament provides individuals an opportunity to give back to the community in one of three ways – attending an event, volunteering, or donating money.

Not-for-profit tournaments under the PGA TOUR umbrella donate their net proceeds to support local organizations, totaling more than $3 billion in donations to date. The impact these tournaments make throughout the year is possible thanks to more than 100,000 volunteers who commit their time to ensure each event is a success.