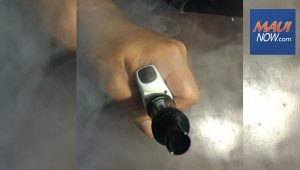 A report from the American Lung Association is calling for tobacco control policies to combat the countyʻs youth vaping epidemic.
The “State of Tobacco Control” asserts that the staggering number of children who vape across the nation “is a direct result of states and the federal government’s failure to enact policies called for in the report such as supporting tobacco cessation services and stronger federal oversight of tobacco products, including e-cigarettes.”
Tobacco use remains the nation’s leading cause of preventable death and disease, taking an estimated 480,000 lives every year.
ALA representatives are calling on Hawaiʻi officials to support cessation services and clear the market of flavors to prevent any further tobacco-related deaths.
According to the ALA, more than one in four high school students vape — a 135 percent increase in high school e-cigarette use in just the past two years.

“In Hawaiʻi alone, there are more than 140,000 current smokers,” ALA Hawaiʻi senior director of advocacy Carrie Nyssen said in a  press release.

“And with the youth vaping epidemic still rising, we may have squandered an opportunity to make the current generation of kids the first tobacco-free generation. Tobacco use is a serious addiction, and working together, we can do more to  prevent and reduce tobacco use.”

The “State of Tobacco Control” report grades states and the federal government on policies to prevent and reduce tobacco use.

“Despite Hawai’i receiving over $154 million from tobacco settlement payments and tobacco taxes, the state funding for tobacco control is just over $6.3 million, just 57.5 percent of  the level recommended by the Centers for Disease Control and Prevention. These funds should be used to support the health of our communities, and to prevent tobacco use and help smokers quit.” Nyssen added.

According to the ALA, Hawaiʻi has the highest reported electronic cigarette use rate among middle schoolers and the second highest vaping rate among high school students in the nation, just behind Colorado.

“State of Tobacco Control” 2020 provides an important roadmap on how states like Hawai’i and the federal government can put in place the policies proven to have the greatest impact on reducing tobacco use and exposure to secondhand smoke. Now is the time for lawmakers in Hawai’i end their failure to act and take this opportunity to achieve lasting reductions in tobacco-related death and disease,” said Nyssen.

As the result of successful lawsuits filed by the ALA and several public health partners, FDA will be required to take action towards tobacco products in 2020. These include finalizing graphic warning labels on all cigarette packs by March 15, and requiring all e-cigarette, and most cigar, hookah, pipe and other manufacturers of deemed products to submit applications to FDA by May 12, 2020 to remain on the market in the US.