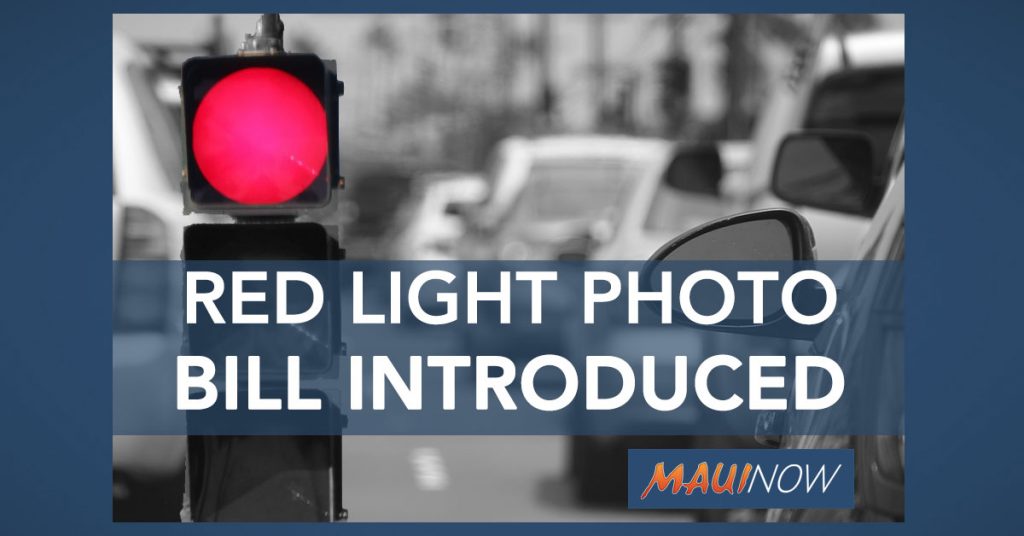 The latest proposal involving a red light photo program in Hawaiʻi, will get a hearing before the House Committee on Transportation on Friday.

House Bill 1676 seeks to establish a three-year photo red light imaging detector system pilot program.  Under the bill proceeds from fines would be expended in the county where they are collected for operation of the program.

The measure calls for the pilot program to sunset on June 20, 2023.

Maui already has traffic cameras for real-time images of traffic conditions at key intersections.  That network is operated by the state Department of Transportation with the first images becoming available on the Valley Isle in September 2019.

According to the bill: “No traffic stop is involved, and a police officer is not at risk from passing traffic or armed violators.  Photo red light imaging detector systems use cameras positioned at intersections where red light violations are a major cause of collisions, serving as a twenty-four-hour deterrent to red light violations.  Sensors are buried under a crosswalk and lead to a self-contained camera system mounted on a nearby structure.  When a vehicle enters the intersection against a red light, the camera takes a telephoto color picture of the rear of the car, capturing an image of the license plate.  A second wide-angle photograph records the entire intersection, including other traffic.”

The bill provides a list of potential benefits:  “Not only are streets safer, but police officers, freed from the time-consuming duties of traffic enforcement, have more time to respond to priority calls.  A violator is less likely to go to court because the color photograph of the violation, imprinted with the time, date, and location of the violation, and the number of seconds the light had been red before the violator entered the intersection, can be used as evidence in court.  Few cases are contested using this system, and officers make fewer court appearances, thus saving costs.”

The bill outlines previous efforts and obstacles in getting similar programs enacted in the past: “While the legislature established photo speed imaging detector and photo red light imaging detector systems to improve traffic safety and enforcement through the passage of Act 234, Session Laws of Hawaii 1998, implementation of these systems as traffic enforcement tools in January 2002 generated intense public opposition.  As a result of this opposition, the legislature repealed Act 234 in its entirety by Act 58, Session Laws of Hawaii 2002.  However, opposition to these programs was directed primarily toward the photo speed imaging detector system and the method by which that program was implemented.  The public perceived that the program was operated to maximize revenue for the vendor running the program rather than to improve traffic safety.”

Bill Backers: System is in Best Interest of Public Safety