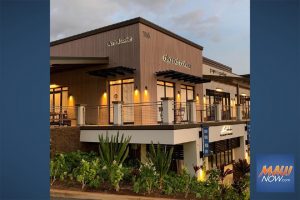 Wailea Village is luring in a big catch with Hawaiʻi-born Chef Troy Guard returning home to open Wailea’s new ocean view restaurant, ʻOPIHI.
Located in Wailea Village, the 5,000 sq-ft. family-friendly, casual restaurant is slated to open in November, focusing on seasonal and sustainable harvests including local seafood, prime meats, and daily fresh produce.
According to a press release from the shopping center, the name ‘OPIHI symbolizes the importance of ʻohana (family) in the Hawaiian culture as ‘opihi are often found in clusters, a representation of tight-knit families. ʻOpihi is also a term of endearment referring to the bond keiki (kids) have with their parents symbolized through the intensive way ‘opihi cling to rocks.
Naming the restaurant ‘OPIHI also honors the beloved limpet and brings awareness to its plight of decreasing population due to over harvesting. Guard and ‘OPIHI restaurant will be supporting the ‘Opihi Rest Areas initiative by Kipahulu ʻOhana’s “Mālama I Ke Kai” program through various fundraisers leading up to and following the opening.
The program’s tagline “more ‘opihi make more ‘opihi” conveys the importance of conservation to help the ‘opihi thrive. ʻOpihi will not be a menu item at the restaurant, but educational information about the ‘opihi, its meaning and its conservation will be provided to guests.
“Some of my favorite childhood memories are picking ‘opihi with my dad, uncles and cousins for family occasions,” Guard said in the release.
“While harvesting ‘opihi was a special excursion, countless weekends were spent on other favorite local pastimes. My dad was known around the island for his barbecues — the more the merrier — and would take the catch of the day or a pig from our neighbor, and cook it in the backyard all afternoon while people gathered around to talk story.”
Two decades since he left Hawaiʻi, Guard has been named one of the “Great Regional Chefs of America” by the James Beard Foundation, and “Best Chefs America” by a peer reviewed publication of the same name.  He is the founder and owner of TAG Restaurant Group, comprising of 13 restaurants throughout the domestic U.S. representing eight concepts from a bubbly breakfast joint HashTAG, quick-casual Bubu, modern steakhouses Guard and Grace, and everything in between.  While the concepts vary wildly, evidence of Guard’s Hawaiʻi roots are creatively woven into the menus in each of his restaurants, an exciting premonition to his eventual return home to the Hawaiian Islands.
Being a member of the seventh generation of a family to be born in Hawaiʻi, Guard says he is looking forward to making new memories with the community through thoughtful partnerships.
“I wanted the restaurant name to have a personal meaning, and also stand for something important. My wife and I want to make sure we appreciate the culture correctly and respectfully by sharing knowledge about the state of ‘opihi now, and what we can do to keep it thriving.”
ʻOPIHI will be located above Droplets. and The Bikini Market on the second floor of Wailea Village.