ʻThe Rescue of The Lost Battalionʻ Exhibit to Open 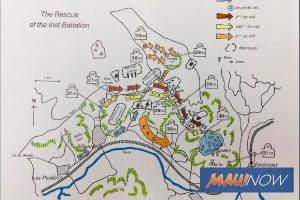 Perhaps the most fabled episode in the history of the 100th Infantry Battalion (IFB)/ 442nd Regimental Combat Team (RCT) (a segregated unit composed of Nisei, or second-generation Japanese), the Rescue of the Lost Battalion, took place in the Vosges Mountains in France at the end of October 1944.

Members of the 1st Battalion of the 141st Texas Regiment found themselves cut off and surrounded behind enemy lines with limited food and water. Ordered to rescue them, the 100th IFB/442nd  RCT, engaged in nearly nonstop combat for six days, eventually reaching the Lost Battalion on October 30. The 100th/442nd suffered hundreds of casualties in rescuing 211 men. When the 100th/442nd were finally relieved, the dead and the wounded outnumbered the living, ending at less than half their usual strength.

The rescue raised the question of whether the Nisei soldiers were being used as “cannon fodder” or whether they were given the most difficult assignments because of their outstanding performance.

Organizers say the exhibit will focus on Maui’s Nisei soldiers and their stories.