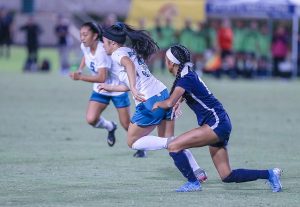 The Hawai’i High School Athletic Association (HHSAA) and its member leagues continue its indefinite suspension of all interscholastic competition and practices – a moratorium that went into effect on March 16.

The HHSAA executive board met via video conferencing today as part of a series of weekly briefings to continually evaluate the public health threat with the spring season on the line for as many as 12,500 student-athletes statewide.

HHSAA Executive Director Chris Chun has not ruled out a modified spring season yet, but for that to be a possibility, he urges the public to heed government orders.

“The HHSAA and member leagues are asking the public to please comply with government instructions in hopes that we can return to our normal daily activities sooner that what is currently being projected,” Chun said in a press release.

“We don’t want to give up on the possibility of having a return to sports in the near future, but the leagues and the HHSAA are making the health and safety of our community its top priority.”

The next HHSAA executive board meeting is scheduled for March 30.