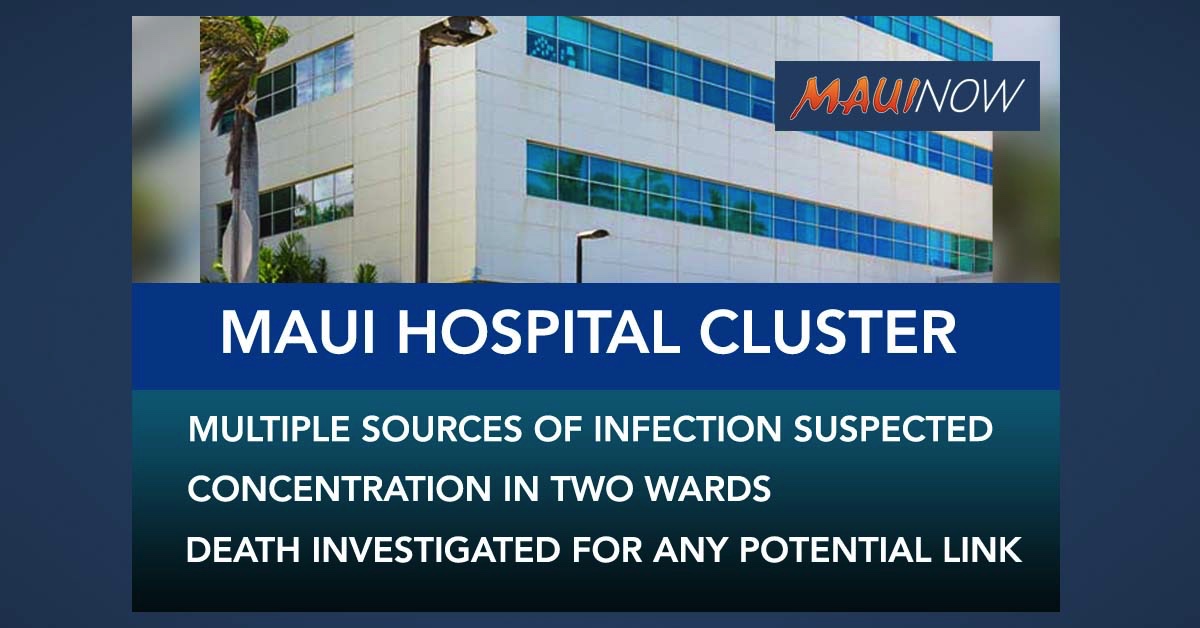 The Hawaiʻi Department of Health is emphasizing that the cluster of cases at Maui Memorial Medical Center is”not a hospital-wide issue at this time,” but involves at least two wards.  State officials say the Chronic Care Ward is their major focus.

A total of 90 staff and 36 patients have been screened and had a swab specimen collected for testing, according to an update provided today.   At this time 29 people have tested positive for COVID-19, although some appear to be separate introductions and not necessarily MMMC/healthcare associated infections, according to the DOH.

While the investigation at the Maui Memorial Medical Center continuing, DOH will be supporting the Maui hospital in notifying patients who have recently been discharged or treated and may be associated with the affected wards and staff.

As Maui learned of its third COVID-19 related loss, questions have surfaced over the extent of the cluster identified at Maui Memorial Medical Center and precautions taken in the weeks leading up to this point.

State Health Director Bruce Anderson says one of the three deaths in Maui County is being investigated to determine if there were any ties to the cluster of COVID-19 positive employees identified at the Maui hospital.

As of Friday afternoon, the count of individuals associated with the Maui hospital cluster has risen to 19.

“There’s one case that we’re looking at–an elderly individual who was in the chronic care unit.  It’s a possibility that there was some association there.  The outbreak in Maui Memorial was relatively limited to two wards as far as we know, and we’re continuing to look into whether patients or staff there were affected,” said Dr. Anderson in response to a question from Maui Now at an afternoon press conference on Friday.

Hawaii News Now questioned the health director on the timing of information being released saying the latest death at Maui Memorial reportedly occurred on April 7, three days prior to the cluster being announced.

Dr. Anderson responded saying, “There was no delay on our part,” noting that the state learned of the death on Friday morning and announced the information within six hours of obtaining the information.

Dr. Anderson noted that in the case of Maui Memorial Medical Center, there was at least one employee who was “sick at work for an extended period of time,” who was later found positive for COVID-19.

“It’s critically important that workers not be allowed to work on the wards or anywhere else.  If you’re sick you should stay home.  Employers should insist that people stay home.  That’s where most of the problems here have occurred,” said Dr. Anderson.

While he said the incident “could have been a major factor in the outbreak,” he said the department is looking into all factors.  “It isn’t certainly one situation or one sole source of infection.  I think there were a number of factors contributing, and that’s what you would expect in a situation like this,” he said.

“Early on when we started hearing about the patients associated with Maui Memorial, there were certainly some travel associated cases.  There are two or three who had a clear history of travel to other locations where COVID-19 is widespread; and it’s very possible that some of those cases were associated with contact with travelers,” said Dr. Anderson.

According to Dr. Anderson, “early on, there certainly were some travelers at the hospital that might have infected the staff and that could have been the start of this.”

In response to a question from The Maui News about the location of positive cases, Dr. Anderson said the two wards at Maui Memorial with the highest concentration of infection included the Pediatric Telemetry Ward and the Skilled Nursing Facility.

He said the more concerning of the two is the Skilled Nursing Facility because, “That’s typically (for) older individual(s) and people with chronic conditions.  They’d be at most risk.”

“But as far as we know, the outbreak was limited to those two wards.  The hospital is still functioning while it’s still able to take patients.  There are much more stringent infection control measures being implemented and it’s a safe place to go–it’s as safe as any hospital, but those two wards were the ones that were most impacted initially,” said Dr. Anderson.

State Health officials say not all hospital employees are being tested at this time, but testing is being done for all contacts and close contacts associated with the cluster.  “Laboratory work for this outbreak is a high priority,” said Dr. Anderson.

“In a hospital setting, we go further than we would perhaps in many other situations, given the fragile nature of the individuals in the hospital,” said Dr. Anderson, noting that more than 70 tests were conducted on staff and some patients in the hospital on Wednesday, “focusing on those with symptoms, but also looking at others who may be at increased risk.”

Maui Health places that number much higher saying 126 patients, caregivers and physicians were tested this week.

“I know all close contacts at the hospital–anyone who was in close contact with any of the confirmed cases… is being tested if they are indeed close contacts–and of course our investigation is ongoing.  I expect it will be several days before we even get through the interviews; but we have staff deployed and they are aggressively pursuing that now,” said Dr. Anderson.

Dr. Anderson said the department is not testing all hospital employees at this time, but they are testing close contacts.  State Health officials say they have not received results back yet from much of the testing conducted at the facility.

State Health officials said hospitals are trying to keep up with policies.  “I think hospitals have gone through a learning cycle here and most of them are actually doing very, very well,” said Dr. Anderson.

He said the Maui hospital has been working to improve infection control procedures and communication in regards to where PPEs can be obtained.

“Obviously there’s a lot of catch up to do, and what happened, happened–so we’re going to need to make sure we do the best we can to try to identify cases and contacts and bring this whole thing to an end very quickly,” said Dr. Anderson.

So far all individuals with symptoms are in isolation and all without symptoms that are identified as close contacts are in self-quarantine.

“I walked the entire hospital today including the units taking care of the positive COVID-19 patients. You can sense the anxiety though. We all I think have anxiety.  These are amazing caregivers that are taking a lot of risk and doing it appropriately with protection,” said Rembis, who said morale was “strong.”

But not all working within the system agree.  Several nurses and hospital staff have reached out to Maui Now expressing dissatisfaction over response to PPE requests and protocols regarding the amount of employees allowed to work in specific areas in light of social distancing guidelines.

Other employees say workers pushed for more proactive response early on out of concern for their own heath and the safety of their families, but were met with opposition from management.

Rembis acknowledged that there is anxiety within the hospital setting, and gave accolades to the staff that continue to provide care.

“They are committed to taking care of these patients. I’ve never seen such amazing staff.  It would be untrue to say that there aren’t some anxieties.  I think the anxiety we have in this community in this room is also in the hospital.  It’s a reality. But they’re going above that and they’re doing a great job. I’ve seen a couple of people scared, and I’m making sure we spend extra time with them and provide whatever assistance they need.  We’re all human,” said Rembis.