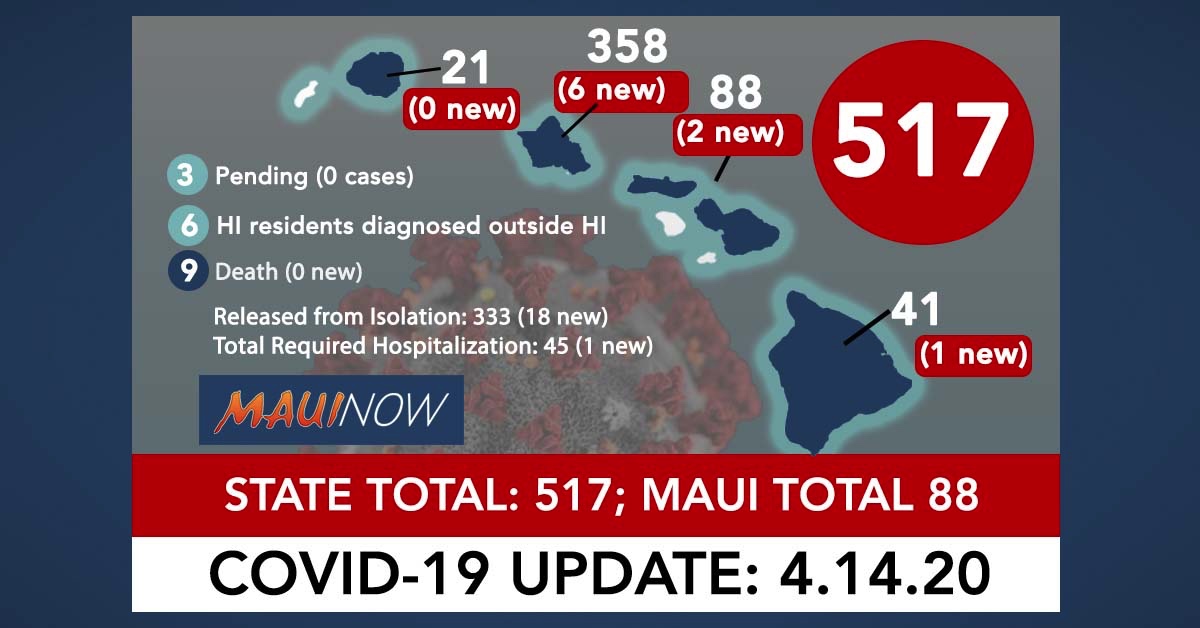 As of noon on Tuesday, April 14, 2020, there are 517 cases of COVID-19 identified in Hawaiʻi with 13 new cases. The state Department of Health cautions not to read too much into the low number of cases, as it is likely a reflection of the rate of test reporting over the weekend.

There are now 3 pending cases, where the island of residency has not been determined, which is unchanged from yesterday’s count.  There were also six cases that are identified as Hawaiʻi residents who were diagnosed outside of Hawaiʻi, up from previous reports of two.

The Hawaiʻi State Department of Health reports that there were 333 individuals released from isolation; and 45 cases that have required hospitalization.

Maui County has 2 new cases for a total of 88 confirmed positive. Of the 88 cases in Maui County, at least 41 have been released from isolation, and 7 have required hospitalization.

Maui County has had three COVID-19 related deaths. Maui reported its first COVID-19 related death on Monday, April 6, of an adult male over the age of 65 with underlying health conditions and exposure to travelers. The second Maui death was announced on Wednesday, April 8, and was an unattended death. A third death in Maui County reportedly occurred on April 7, but was reported in the state count on Friday, April 10. The third case involved an elderly individual who was in the chronic care unit.

There is a COVID-19 cluster on Maui at the Maui Memorial Medical Center.  The state adjusted the Maui Hospital cluster count upward to 34 individuals under investigation.

Mayor Victorino cautioned that the low number is likely because results are not yet in for ramped up testing conducted in Maui County.

“We believe there’s an uptick coming because of the vast number of tests that have been and will be conducted over the next week or so.  But I think it’s important that we find out right now if there’s clusters–that we take care of those clusters and prevent spread all around,” said Mayor Victorino.

“As a reminder, our counts will continue to grow, I believe because of the amount of uptick in testing. We have done almost 1700 tests–almost 2,000 tests in the last week,” said Mayor Victorino.