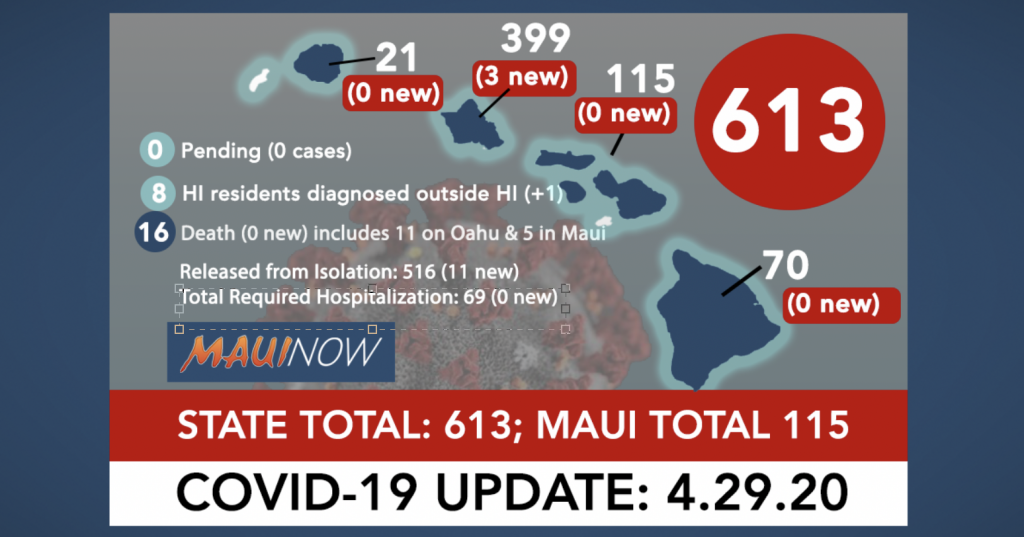 As of noon on Wednesday, April 29, 2020, there are 613 cases of COVID-19 identified in Hawaiʻi with 3 new cases on Oʻahu and one additional case in a Hawaiʻi resident who was diagnosed outside of Hawaiʻi.

To date, 516 people have recovered including 83 in Maui County.

The Hawaiʻi State Department of Health reports that there were 516 individuals released from isolation; and 69 cases that have required hospitalization.

Maui County’s count remained unchanged at 115 confirmed positive. Of the 115 cases in Maui County, at least 83 have been released from isolation, and 14 have required hospitalization.

To date, there have been 16 COVID-19 related deaths in Hawaiʻi, including 11 on Oʻahu and 5 in Maui County.

At Maui Memorial Medical Center, state Health officials say 38 staff and 21 patients continue to be under investigation as potentially associated with the cluster. DOH is recommending the facility repeat in-service training for staff on proper PPE use, and other protective measures. The DOH’s investigation at MMMC continues and DOH officials say “it appears the outbreak may have been driven by a single healthcare worker who was allowed to work while ill.”

On Tuesday, local government leaders visited and toured the outside of Maui Memorial Medical Center in compliance with the hospital’s COVID-19 no-visitor policy, and received an update from Maui Health on response efforts at the facility.

On Tuesday, April 28, officials confirmed that an elderly Lānaʻi woman contracted COVID-19 while she was hospitalized at the Maui Memorial Medical Center.  The woman initially tested negative for COVID-19, but a recent test came back positive.  She will remain on Maui until she is healthy enough to return home to Lānaʻi and she no longer poses a risk of transmitting the virus to others.

A joint statement was released on Wednesday evening, April 22, from Mayor Michael Victorino and Merriman’s Kapalua restaurant confirming the location of the grouping from March, which consisted of three COVID-19 positive individuals and between 65 and 100 exposed contacts.  Health officials say the grouping does not currently pose a significant risk to the community.

Two individuals from the Ka Hale A Ke Ola Homeless Resource Center on Waiale Road in Wailuku on Maui have been moved to a Department of Health quarantine facility after one of them tested positive for COVID-19 and the other was awaiting test results at last report.

There’s also two home health patients with Hale Makua Health Services and a nursing home resident from Hale Makua Kahului that tested positive for COVID-19. The asymptomatic resident who had tested positive has completed the required 14-day quarantine and is still showing no symptoms of COVID-19, however, additional tests will be administered to confirm recovery. As for the home health cases, one client has been released from isolation and is recovering and the other client was in quarantine at last report. 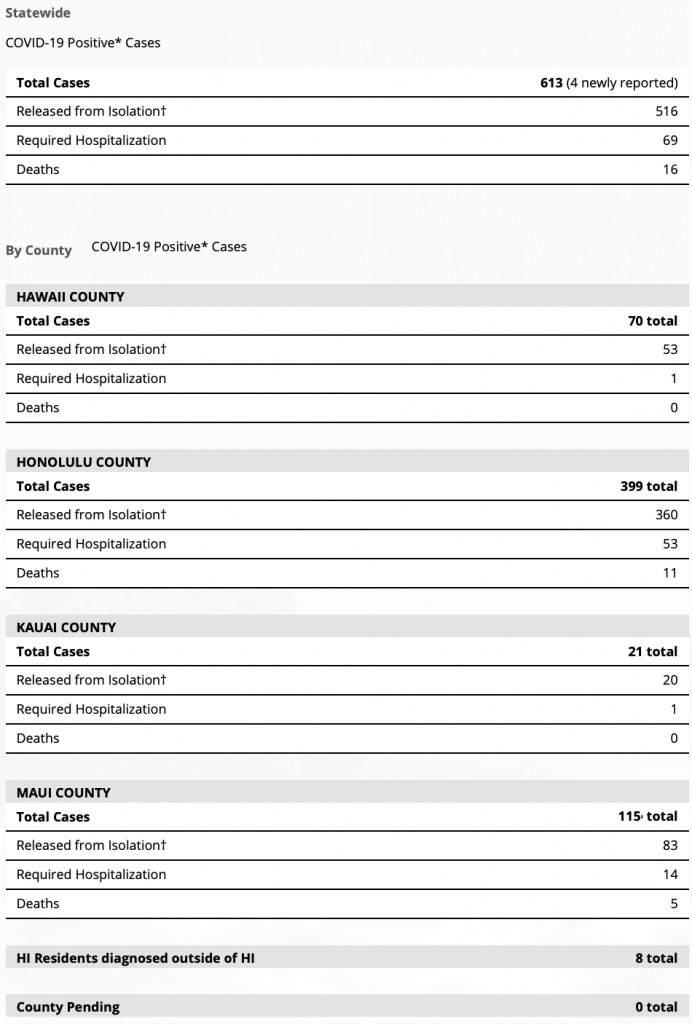