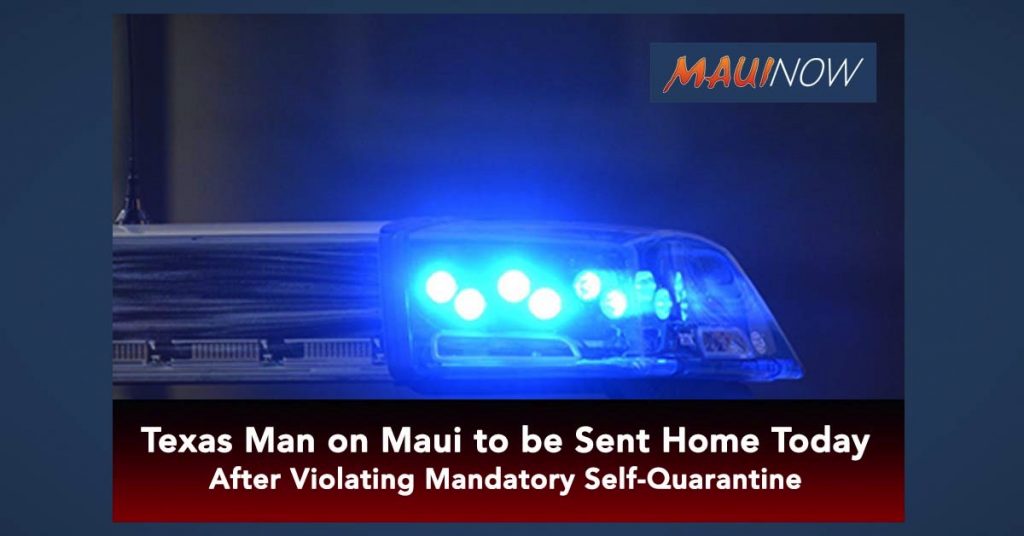 On Maui, 34-year-old William Lefear is voluntarily returning to his home in Houston today, after being contacted by Maui Police repeatedly for violating the mandatory self-quarantine rule. His quarantine period was scheduled to end on May 11. An investigation revealed that Lefear left his hotel room late Monday and returned after midnight. The next morning when officers contacted him, he said he wasn’t aware of the mandatory self-quarantine. He told them he now understood the rules and would not leave his room again. Tuesday evening police were contacted again, as the Texas resident was seen leaving his room. He was arrested and released pending further investigation.

A Florida man and an Illinois woman are the latest people to be arrested and charged under the State’s COVID-19 emergency rules. 25-year-old Mitchell Lawrence Shier of Miami and 27-year-old Anne Elizabeth Rush were first contacted by Honolulu Police yesterday, the same day they’d checked into a Waikiki hotel. Hotel staff called police after they saw the couple returning to their room with shopping bags and take-out food in violation of the mandatory, traveler 14-day self-quarantine rule. This morning special agents from the Dept. of the Attorney General’s Investigations Division went to the hotel and arrested Shier and Rush. They are charged with violation of the 14-day quarantine rule and unsworn falsification to authorities.

Also, yesterday, 60-year-old Leif Anthony Johansen of Truckee, California was observed by a witness jet-skiing off a North Shore beach. Authorities say he was supposed to be in self-quarantine at his Waialua home beginning on April 18th. Yesterday, Johansen was seen leaving his residence and was then followed to Costco in Waipio. He was arrested by AG’s special agents as he was loading groceries into his vehicle. In addition to being charged for violating the self-quarantine rule, he is also charged with unsworn falsification to authority.

Shier, Rush, and Johanson were booked and charged and then released on their own recognizance and ordered to complete their remaining quarantine periods in their place of lodging or home.

Hawai‘i Attorney General Clare Connors reminds all visitors and returning residents flying into Hawai‘i at this time, “It is always our hope that persons coming to our state follow our laws and respect the needs of our community. In light of the health and safety concerns presented by this pandemic, law enforcement has a zero-tolerance attitude towards anyone who violates the traveler self-quarantine rule. When we receive reports of violations, we will pursue them. We’re asking everyone flying into the state to respect the emergency rules for their own protection and for the health and well-being of all of Hawai‘i.”