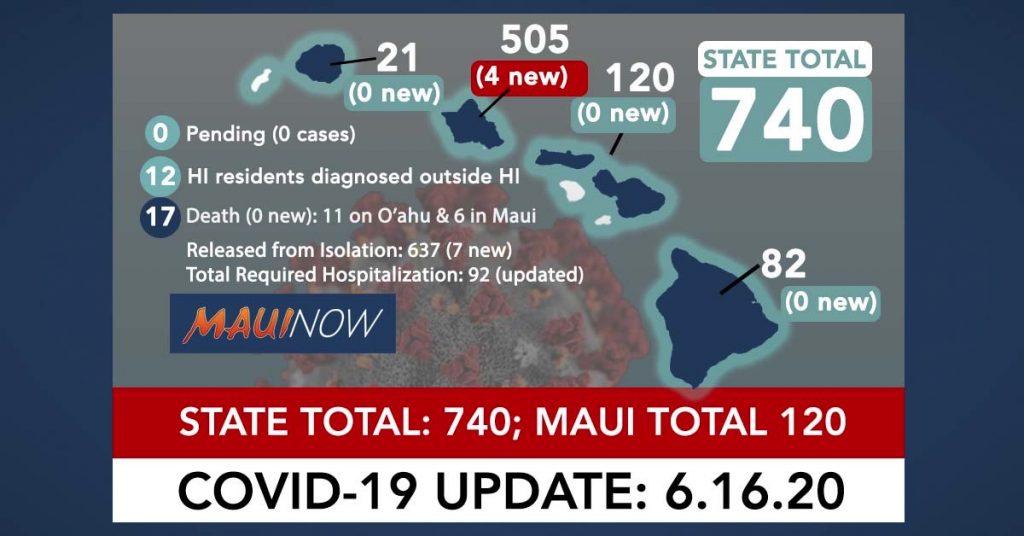 There are 4 new COVID-19 case reported in on Oʻahu today, pushing the statewide count to 740 cases in Hawaiʻi over the course of the pandemic.

Three adults and one person under 18-years of age are the four new COVID-19 cases being reported by DOH. All four cases were diagnosed on O‘ahu, but the residency of one case is still under investigation. Two cases involve household contact in separate households.

The Hawaiʻi State Department of Health reports that there were 637 individuals released from isolation; and 91 cases (12%) that have required hospitalization. A total of 674 patients (91%) were residents.

Maui County’s count remained unchanged from yesterday. Of the 120 cases in Maui County, at least 113 have been released from isolation, and 22 have required hospitalization.  Based on the current numbers, there is just one active case in Maui County.

In Maui County, cases with onset in the last 28 days have been in the Wailuku zip code.  Of the 120 cases documented in Maui County over the course of the pandemic, Wailuku and Kahului had the most cases (21-50 each); followed by Lahaina and Kīhei (11-20 each); Makawao (6-10 cases); and Kula, Hāna, Haʻikū and Molokaʻi (1-5 cases each).

As of June 7, there are no COVID-19 cases at the Maui Memorial Medical Center, and as of Monday, June 8, there was only one person on Maui in home quarantine with the virus. Also, starting June 8, the Maui Memorial Medical Center began universal testing for COVID-19 on all patients admitted through the Emergency Department and Obstetrics patients.  Universal testing expands to include direct admissions on Wednesday, June 10, 2020.

Governor David Ige extended the mandatory 14-day quarantine for international and out-of-state arrivals into Hawaiʻi through July 31, 2020. “We will not reopen out-of-state travel before the end of June,” said Gov. Ige, and noting that his latest Ninth Supplemental Emergency Proclamation gives him the flexibility to reopen travel “when the state is ready.”

A separate quarantine in place for interisland travel is being lifted on Tuesday, June 16.  This applies only to air travel within the state, and anyone arriving into the state would still be subject to a 14-day quarantine through at least the end of July.  As the state lifts the interisland quarantine, they will be implementing thermal screening, a new interisland travel form and a more robust contact tracing program.

The Governor granted the County of Maui’s request to reopen more businesses and activities on Monday, June 15, 2020. This includes bars which will be allowed to operate with modifications; and some organized team sports will also resume with modifications including canoe paddling. Football and rugby practices are not allowed to start at this time and No close contact activities will be permitted, including but not limited to: huddles, high fives and handshakes.