A recent survey in the Molokini Reserve offshore of Maui found more fish and larger predators have returned to the area in the few months that boat traffic was restricted there due to COVID-19.

The study, led by researchers at the University of Hawaiʻi, found greater fish populations and the return of ulua, omilu and reef sharks. Researchers say it’s sign of a healthy ecosystem, but say the increases are likely temporary and will probably disappear once visitors return to Molokini.

The study also finds that marine systems can quickly rebound if given a chance through more effective management; and provides critical information for the State’s initiative to effectively manage 30% of Hawai‘i’s nearshore waters by 2030.

“Characteristics of Effective Marine Protected Areas in Hawai‘i” was published in the journal Aquatic Conservation: Marine and Freshwater Ecosystems by lead author Dr. Alan Friedlander with Mary Donovan and Whitney Goodell of the University of Hawai‘i, and Haruko Koike and Paul Murakawa, of the State Department of Land and Natural Resources’ Division of Aquatic Resources.

The study finds Hawai‘i’s nearshore waters need more effective management and that a diverse integrated system of marine management areas can help restore the state’s declining coral reef fisheries and boost the resilience of our coral reefs in a changing climate.

Authors say well-designed marine management areas are a proven tool that can restore coral reef fisheries, increase coastal protection and provide recreational, cultural and economic opportunities. The study found that while Hawai‘i has many marine management areas, most are too small and allow some form of human use within their boundaries that can limit their ability to restore depleted fisheries.

“We need to improve the marine management areas we already have and effectively manage additional areas if we are to protect and restore Hawai‘i’s unique and valuable marine environment,” said University of Hawai‘i fisheries researcher, Dr. Alan Friedlander, the study’s lead author. “That includes setting aside some areas where fishing is prohibited, because we know that replenishes fish stocks. It also includes areas where the State co-manages resources with coastal communities that want to implement more sustainable traditional management practices.”

The study also shows that, overall, marine management areas in Hawai‘i are too small and that the average marine management area size (1.1 km2) is minuscule compared with the geographic extent of the species they are designed to protect. Hawai‘i’s marine management areas vary in size and levels of governance, enforcement and effectiveness. They comprise only 5% of State waters, extending out to 3 nautical miles from the shore, limiting their ability to sustain fish abundance across the state. Of that 5%, fully and highly protected waters cover only 1.4% of nearshore areas, with Kaho‘olawe Island Reserve accounting for most it. Less than 0.1% are within marine protected areas, which provide full protection for fish to grow large and reproduce.

Studies show that when fish can mature in protected waters, they grow much larger and can produce exponentially more eggs than smaller, younger fish. The larger fish and their larvae can spill over into neighboring areas that are open to fishing. “Many fishers already know this and engage in what’s called ‘fishing the line’ between MPAs and open fishing areas,” Friedlander said. “In general, fishers can get the greatest benefit by protecting the largest spawning fishes in larger no-fishing areas.”

With climate change and increased coral bleaching already occurring in the islands, establishing more and larger management areas will help protect the state’s nearshore resources into the future, the study says. 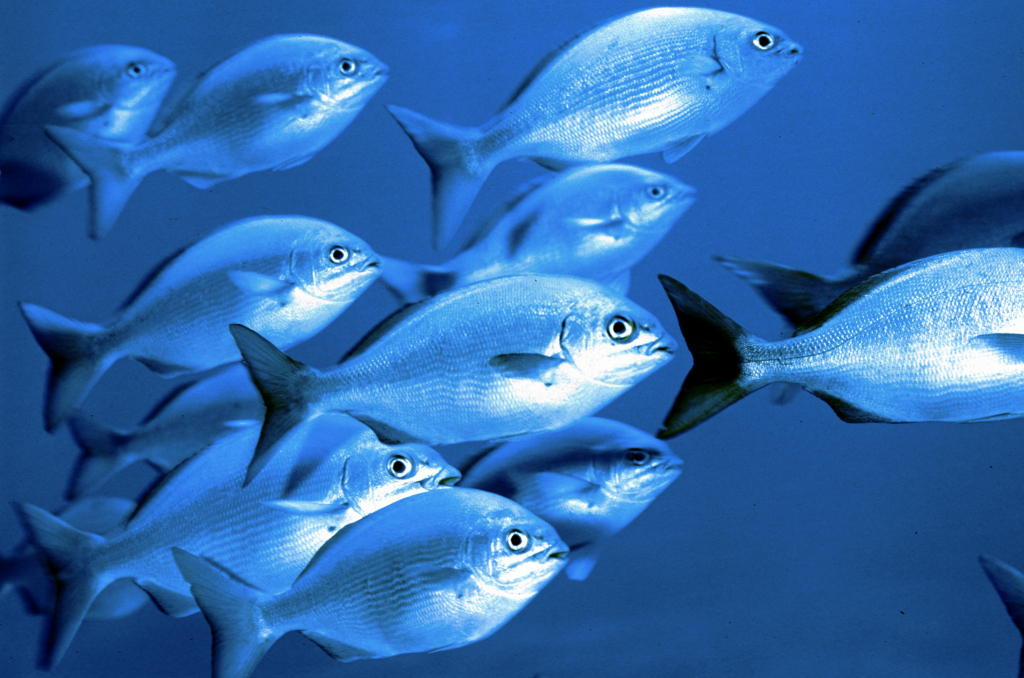 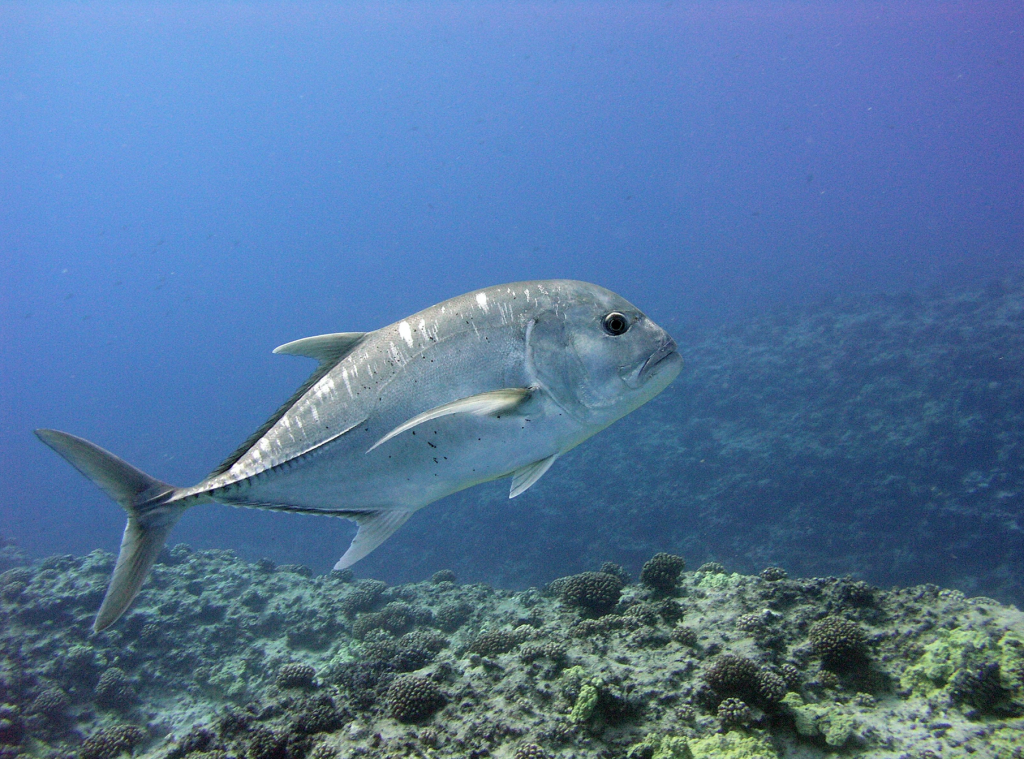 An ulua (gianttrevally, Caranx ignobilis)spotted during June 2016surveysconducted at Pupukea Marine Life Conservation District by partners including the National Oceanic and Atomospheric Administration (NOAA), University of Hawaiʻi, and Mālama Pupukea-Waimea.(Photo by Alan Friedlander/University of Hawaiʻi.) 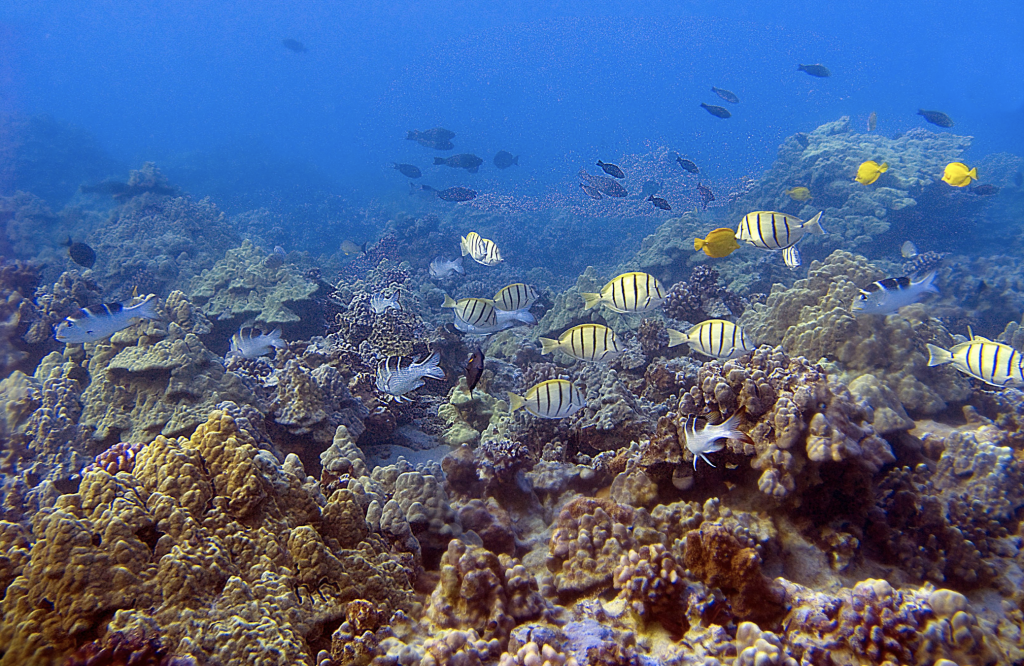 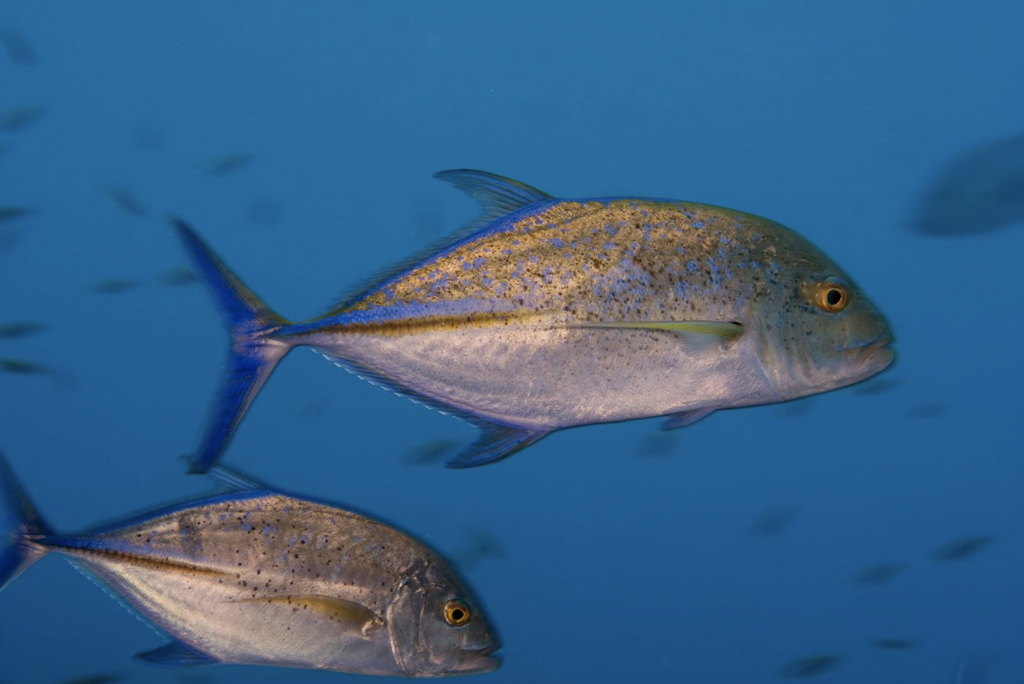 Several Papio (Trevally) at Molokini Crater, Maui spotted during May 2020 surveys conducted by partners including State Department of Aquatic Resources (DAR), College of William and Mary, National Geographic, University of Hawaiʻi, Maui Nui Marine Resource Council. Papio are Ulua that have not yet reached 10 pounds. (Photo by Alan Friedlander/University of Hawaiʻi.) 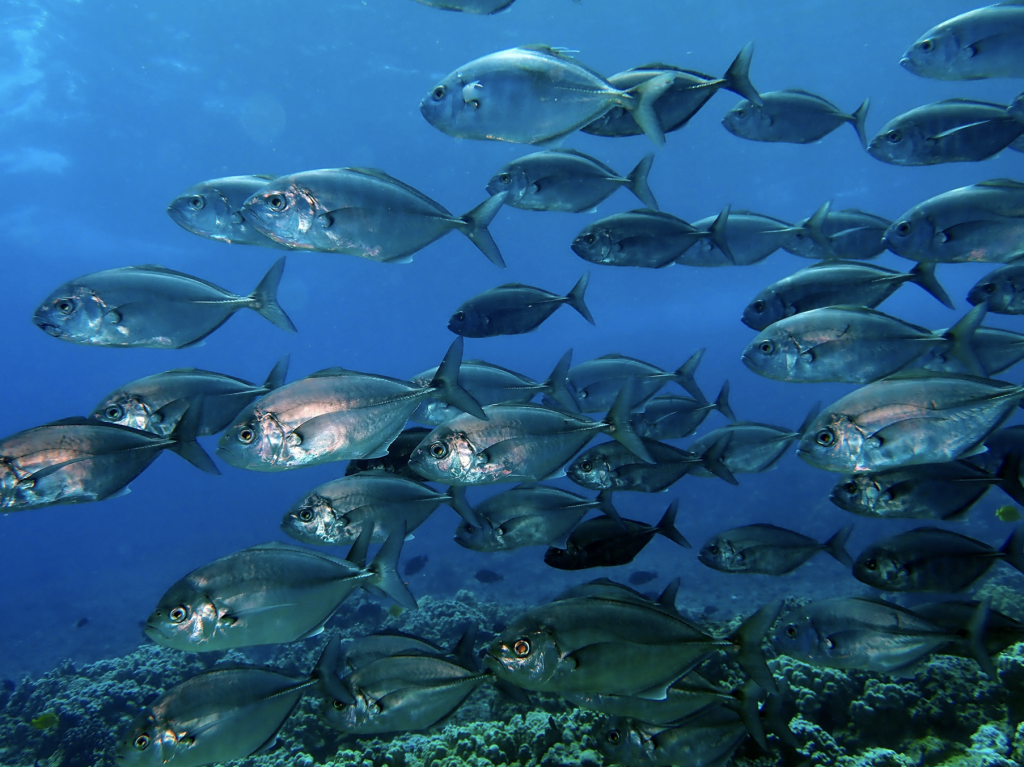 A school of Barred Jacks (Carangoides ferdau) at Molokini Crater, Maui spotted during May 2020 surveys conducted by partners including State Department of Aquatic Resources (DAR), College of William and Mary, National Geographic, University of Hawaiʻi, and the Maui Nui Marine Resource Council. (Photo by Whitney Goodell)