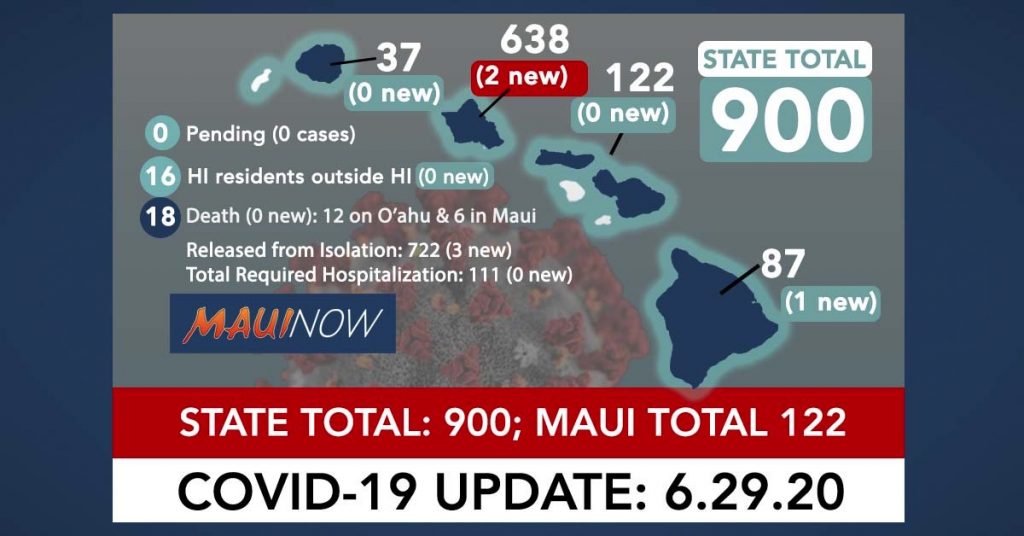 There are just two new COVID-19 case reported for Hawaiʻi today, both on the island of Oʻahu–bringing the statewide count to 900 cases in Hawaiʻi over the course of the pandemic.  The report comes after a double-digit increase in cases by 27 on Sunday, with a cluster of 17 Honolulu cases liked to a funeral on Oʻahu.

Both of the new cases today are associated with a known case and both adults are in isolation.

The Hawaiʻi State Department of Health reports that there were 722 individuals released from isolation; and 111 cases (12%) that have required hospitalization. A total of 829 patients (92%) were residents.

As a result of updated information, one case from Maui was removed from the counts, according to the State Department of Health.  Of the 122 cases in Maui County, at least 113 have been released from isolation, and 25 have required hospitalization.  Based on the current numbers, there are three active cases in Maui County.

In Maui County, more than 9,700 tests have been conducted, with nearly 99% returning negative. This includes 11 new cases over the past 60 days.

Additional key factors are the availability of ICU beds, ventilators and PPE supplies.  In Maui County, less than half of the ICU Beds are in use, and an estimated 21% of ventilators are in use.  There are currently no ICU Beds or ventilators being used for COVID patients in Maui County. County officials say there continues to be an adequate supply of PPE with more on order.