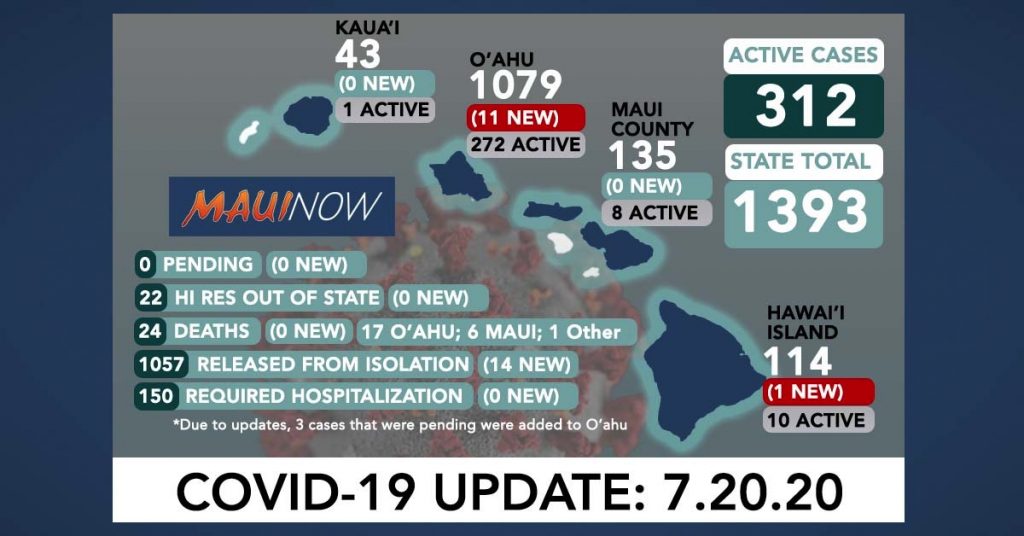 Today there were a total of 12 new COVID-19 cases in Hawaiʻi for a total of 1,393 reported over the course of the pandemic. The new cases include 11 on Oʻahu and one on Hawaiʻi Island.

So far 1057 people have been released from isolation and 312 COVID-19 cases remain active in the state.

Hawaiʻi also reported its 23rd and 24th COVID-19 related death on Friday, both on the island of Oʻahu in elderly residents with underlying health conditions, according to the state Department of Health. Prior COVID-19 related deaths are posted here.  Saturday, July 11, had the greatest single day number of reported cases (42) since DOH began tracking cases in late February.

The Hawaiʻi State Department of Health reports that there were 1057 individuals released from isolation; and 150 cases (11%) that have required hospitalization.  At least 1,273 patients (92%) were residents.

To date, there have been 24 COVID-19 related deaths in Hawaiʻi, including 17 on Oʻahu, six in Maui County, and one Kauaʻi resident who was hospitalized in Arizona. Hawaiʻi has a mortality rate of 1.7 deaths per 100,000, according to Lt. Gov. Green.