Mayor Advised of Cleaning at MCCC as COVID-19 Precaution 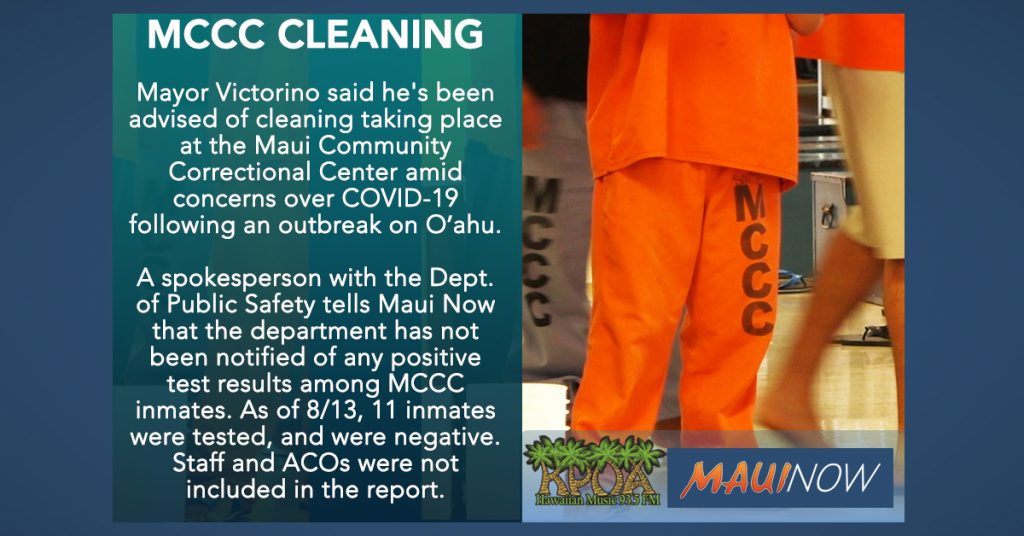 Maui Mayor Michael Victorino this morning said he’s been advised of cleaning taking place at the Maui Community Correctional Center amid concerns over COVID-19 following an outbreak at a separate state-run facility on Oʻahu.

A spokesperson with the state Department of Public Safety tells Maui Now that the department has not been notified of any positive test results among MCCC inmates as of this morning. According to a department inmate report updated on Thursday, there were 11 individuals at the Maui facility that were tested, but all of those tests have been negative. The report does not include data for staff or adult corrections officers, but department officials confirmed that no one at the facility has tested positive at the time of this posting.

“I don’t have all of the details at this time but I will say that I have been advised by the medical people as well as the Department of Public Safety that they are making sure that everything is thoroughly cleaned and doing what they can to protect the inmates that are confined to MCCC,” said Mayor Victorino said in a morning interview with KPOA 93.5 FM’s Shane Kahalehau.

This comes after a large cluster reported at the Oʻahu Community Correctional Center where at least 105 positive cases have been identified as of Thursday, including 86 inmates and 19 staff members. Seventy of those cases were reported yesterday amid mass testing of all inmates at each of the 19 housing units.  Five housing units at OCCC are now on lockdown due to COVID-19 related measures.

“There has been a major breakout in OCCC on Oʻahu and so I think we’ve learned some valuable lessons and we’re trying to implement more stringent and safety message here on Maui.  However, because of the proximity and the confinement we can see that as being a hotspot and being very dangerous, so we’re monitoring that very closely,” said Mayor Victorino.

Public Safety Director Nolan Espinda commented yesterday on the Oahu cluster saying, “As the mass testing continues, we expect to see more positive cases. We appreciate how fast the DOH and National Guard are moving to coordinate the testing of identified staff and inmates. OCCC staff have done an amazing job following the PSD Pandemic Plan to quickly identify and quarantine these individuals.  We will continue to be vigilant in our efforts to mitigate the spread of this virus.”

The update comes amid news of seven additional COVID-19 cases on Maui.  On Thursday, Maui Health confirmed that one health care worker and two patients at Maui Memorial Medical Center have tested positive for COVID-19.

In reference to the cases at the Maui hospital, Mayor Victorino said, “it’s community driven from what I’ve been told; however it still entered our hospital and they are working very diligently right now to make sure we don’t have any reoccurrence of what happened the first time.  They learned a lot of valuable lessons.”

With another triple digit record case count of new COVID-19 cases in Hawaiʻi on Thursday, Governor David Ige is suggesting more restrictions could be necessary in order to get the situation under control, especially on Oahu where more than 96 percent of active cases are located.

“If things do not get better, we will have no choice but to look at more restrictions.  This could include going back to the stay-at-home orders, or other restrictive measures that we need to implement in order to stem the increase in the number of COVID cases.  It also means that we will be looking at a delay of the trans-Pacific pre-travel testing program.  I know that going backwards will cause further harm to our economy, but we have always said that the health and safety of our community will be the highest priority,” said Gov. Ige during an afternoon press conference yesterday.

“If we do have to go to a stay-at-home order, it will be to save lives, and ultimately stop the virus sooner rather than later.  I want to reassure people that we definitely have capacity in our hospitals right now, but it is getting closer–closer to the point that we will overflow our hospitals and not be able to give all of the services which all of our citizens deserve.”