Three Free Drive-In and Live-Streamed Concerts at the MACC 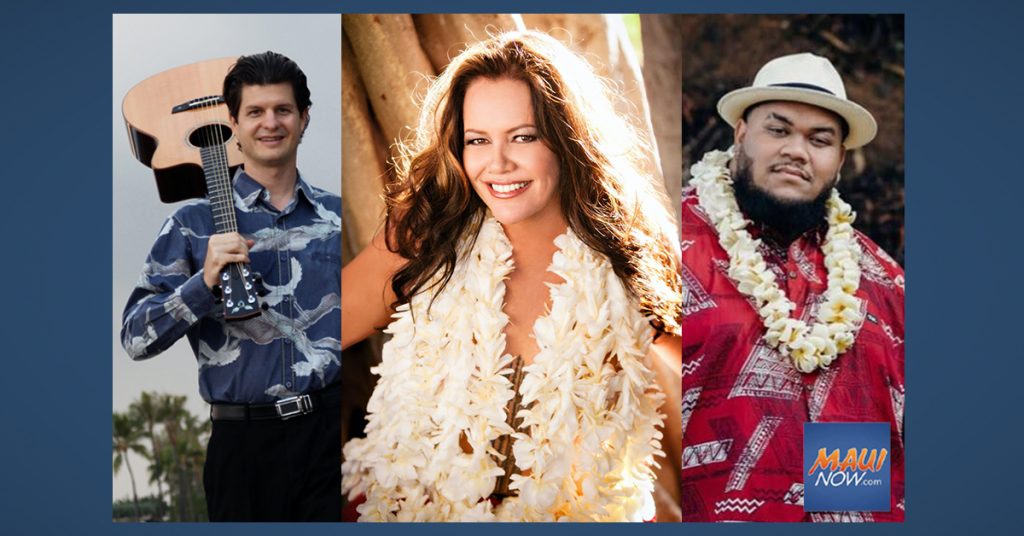 The MACC’s Live @ the MACC series continues this weekend, Nov. 20-22, with three free outdoor, drive-in concerts in the A&B Amphitheater. Each concert will also be livestreamed.

Admission is free, but due to the limited space and special logistics required, advance registration is mandatory by logging on to MauiArts.org. Registrations become available Wednesday, Nov. 18 to MACC members at 10 a.m. and then to the general public at Noon. Due to the limited vehicle capacity each night, only one of the weekend’s concerts can be ordered per household. All three concerts will be livestreamed on the MACC’s website or on its Facebook or YouTube pages.

MACC President and CEO Art Vento said, “We will continue to address and evolve creative solutions during these challenging times. Following the safe execution of our Starry Night Cinema Drive-In-Movies we have evolved the concept to include Drive-In-Concerts at the MACC. The event layout maintains socially distanced space between all vehicles, with each vehicle becoming its own viewing pods. Given that spaces inside the venue are limited, and knowing that many of patrons still should not venture out in public, we have added a live-streaming component to allow those without live/in-person tickets to be able to view these popular concerts from the comfort of their home.”

The Live @ the MACC series is made possible by the generous support of the County of Maui and the Office of Economic Development. The series is designed to bring much needed opportunities for many of Hawai‘i’s performing artists and art forms, in a combination of live/virtual or safe/live in-person events that meet or exceed all current CDC guidelines.

Due to the current Covid-19 circumstances, attendance at the on-site events are requiring special logistics to create a safe, enjoyable environment for audiences. Admission is free but requires advance registration due to a limited number of socially distanced vehicles accommodated each night. Patrons need to register in advance on a first come, first served basis by logging on to MauiArts.org. Once a reservation is set, attendees must bring their original, bar-coded print-at-home e-ticket confirmation or have it ready to present on their mobile device. Only one scan allowed per e-ticket so duplicates will not be honored. Reservations are non-transferable.

The MACC’s main entrance will open each night starting at 5 p.m. Once inside the venue, attendees will not be allowed to exit their vehicles during the film in order to adhere to safety and social distancing guidelines.

No alcoholic beverages are allowed in vehicles in accordance with Maui County liquor laws. Restroom use will be limited to urgent needs only and patrons are required to wear a mask and socially distance from others. The MACC is a non-smoking/non-vape venue

The MACC still remains closed to the public on a daily basis and guidelines dictate that this will continue for the foreseeable future. In the coming weeks, The MACC will continue to add more Live @ the MACC events encompassing Hawai‘i-based artists in music, dance and visual arts presented in formats that are safe for all involved.

The Maui Arts & Cultural Center is still experiencing an extended “intermission” but remains committed that – When it CAN happen SAFELY on Maui, it WILL happen at the MACC. For more information log on to MauiArts.org or call the MACC Box Office weekdays 10 a.m. to 4 p.m.

Josh Tatofi was born and raised in Honolulu, Hawai‘i. With the release of his first Hawaiian language single, entitled Pua Kiele, Josh expressed his adoration for the language, culture and traditions of Hawaii. In 2016, Josh released a full-length Hawaiian album, also titled Pua Kiele, and with it embedded his imprint in the Hawaiian music scene. Since then, Josh has earned the nickname as, “the Luther Vandross of Hawaii.” And with a significant title to bear, Josh Tatofi continues to express his soul through Hawaiian mele. Josh was the big winner at this year’s Na Hōkū Hanohano Awards winning five awards including Hawaiian Single of the Year, Male Vocalist of the Year, and Favorite Entertainer.

Amy Hānaiali’i Gilliom remains Hawai’i’s top selling female vocalist of all time. Her success as a recording artist is evidenced by the numerous awards and acknowledgements for her many albums, including six GRAMMY nominations and 18 Nā Hōkū Hanohano awards. Her Friends and Family album showcased a duet with country music legend Willie Nelson. Alongside and recording with the best, Amy also has performed live and opened for renowned artists like Earth, Wind and Fire, Carlos Santana, Boz Scaggs, Diana Krall, Joe Cocker and many more and her upcoming release features a duet with Michael McDonald.

Jeff Peterson is recognized as one of Hawaii’s most versatile musicians and is at the heart of the Hawaiian music scene today. His passion for the guitar has allowed him to shine as a solo artist and has given him the opportunity to collaborate with a wide variety of artists from Hawaii, across the US, and abroad. His focus on Slack Key guitar, classical, and jazz music has allowed him to develop a unique and transcendent voice on the guitar while being deeply rooted in the traditions of his Hawaiian heritage. He has contributed to two Grammy Award-winning recordings and has been honored with nine Na Hōkū Hanohano Awards.

Henry Kapono is a performer who has it all – vocalist, guitarist, songwriter, composer, thrilling performer, audience favorite, and multiple honors and awards, including a Grammy nomination. He has taken home 18 Nā Hōkū Hanohano Awards, including Male Vocalist of the Year, Song of the Year, Single of the Year, and Album & Rock Album of the Year. He has been at the creative forefront of contemporary Hawaiian music throughout his career, from the laid-back island rock of Cecilio & Kapono in the 1970s and 80s, to launching his solo career that produced 18 albums and fans around the world to his Henry Kapono & Friends collaborations celebrating the music that represents the sound track of Hawai‘i. His groundbreaking The Wild Hawaiian album fused the power of Hawaiian traditions with driving rock rhythms and a soundtrack for the new century. The simple honesty of his lyrics and music touch the soul and his wildly talented guitar playing shares his joy in being alive. Kapono has travelled the world with innovation and creativity of music that very few artists are able to sustain.

Keola Beamer has breathed new life into slack key guitar music yet stays true to its deep Hawaiian roots. He is a Hawaiian legend: singer-songwriter, composer, guitar master, with an impeccable, gorgeous style that is featured on The Descendants soundtrack and his 17 CDs. Keola was one of the first to use Hawaiian slack key techniques to create contemporary music that is also at home on jazz or classical stages. Keola established himself early as a leader of the wave of contemporary Hawaiian music when he wrote the classic Honolulu City Lights – which is still one of the all-time best-selling recordings in the history of Hawaiian music.

Born and raised in Kihei, brothers Kamaka & Kala’e Camarillo come from a family of musicians and music educators. Their mother, Cora, is the sister of multi Nā Hōkū Hanohano award winner, Lehua Kalima of Nā Leo Pilimehana. Their father, Rama, is well known around Maui for starting the Kalama Intermediate ‘Ukulele Band.

Kamaka Camarillo broke out into the music scene in 2018 after the release of his debut single, E Pi’i Mai, with Kāwika Aspili. The song took the islands by storm and led to Kamaka being nominated at the 2019 Island Music Awards for Breakout Artist of the Year, and both Hawaiian Single and Music Video of the Year at the 2019 Nā Hōkū Hanohano Awards. This year, his debut album, S.O.U.L. Songs of Unexpected Life, received a Nā Hōkū award for R&B Album of the Year and he was nominated for Most Promising Artist.

Kala’e Camarillo entered the music scene in 2009 when he and his cousin, Dane Lum Ho, won Tom Moffat’s state wide Band Champ competition, and subsequently opened for two major acts, The Stylistics and America. In 2016, Kala’e released his first album, Working Man, which garnered him a Nā Hōkū nomination for Most Promising Artist. This year, he was nominated for Male Vocalist of the Year and won the Contemporary Acoustic Album of the Year for his second album, Feel at Home.

Hawaiian singer-songwriter John Cruz engages audiences with rich storytelling through songs ranging from Hawaiian to blues, folk, R&B and more. Cruz is both a Grammy and Nā Hōkū Hanohano Award-winner. Captivating guitar playing, soulful vocals and a compassionate, genuine heart make Cruz one of Hawai‘i’s most beloved artists. On stage, he fully embodies every song with this alluring energy translating to his acclaimed albums, Acoustic Soul (one of the best-selling Hawai‘i records of all time) and One of These Days (bowed at #1 in Hawai‘i and #6 on Billboard’s World Music chart). John has performed in some of the finest venues and festivals around the world including Bluesfest in Australia, Bonnaroo Music and Arts Festival in Tennessee, New Orleans Jazz and Heritage Festival, Summerstage in New York’s Central Park, Carnegie Hall and at Austin’s South By Southwest.

Barry Flanagan is a singer-songwriter, musician and founder of the acclaimed World Music group HAPA. Flanagan is known for his guitar and songwriting skills, vocal performances and ocean awareness projects. In 1980, Flanagan moved to Hawai‘i to research and study the art of Ki Ho’alu, or slack key guitar and Haku Mele composition. It was after hearing the music of American musician and film score composer Ry Cooder with legendary slack key master Gabby Pahinui that inspired Flanagan’s sojourn in Hawai‘i to explore and learn these two art forms. Flanagan immersed himself in Hawaiian culture and art, seeking out native speakers, teachers and composers of Hawaiian songs, passionately studying indigenous art forms with Maui as the backdrop. In 1983 Flanagan founded a musical duo with Keli’i Kaneali’i on Maui, naming it HAPA, the Hawaiian word meaning “half” and also used to describe people of mixed Pacific Island ancestry. The duo went on to become one of the most recognized names in Hawaiian music.

Eric Gilliom is a recording artist and star of stage and screen, having appeared in movies, TV, on Broadway, and in concert venues throughout the country. He’s performed alongside legends including Willie K, Mick Fleetwood, and Jamie Foxx, and descends from a family of entertainers. His most recent appearance at the MACC was in his popular one-man show, White Hawaiian, in which he explored identity through the lens of Hawaiian history, contemporary culture, and family.

Anthony Pfluke is a 19-year-old singer-songwriter born and raised on Maui. He performs Hawaiian music, contemporary and island style, and his original compositions on the ‘ukulele and piano. He has been playing and singing for about eight years and has been involved in many events around the island and elsewhere including the March for Our Lives concert at the MACC in 2018 as well as the Maui ‘Ukulele Festival, Fleetwood’s, and at many of Maui’s top resorts. He has rapidly become a Maui favorite and is preparing to release his third album in December.