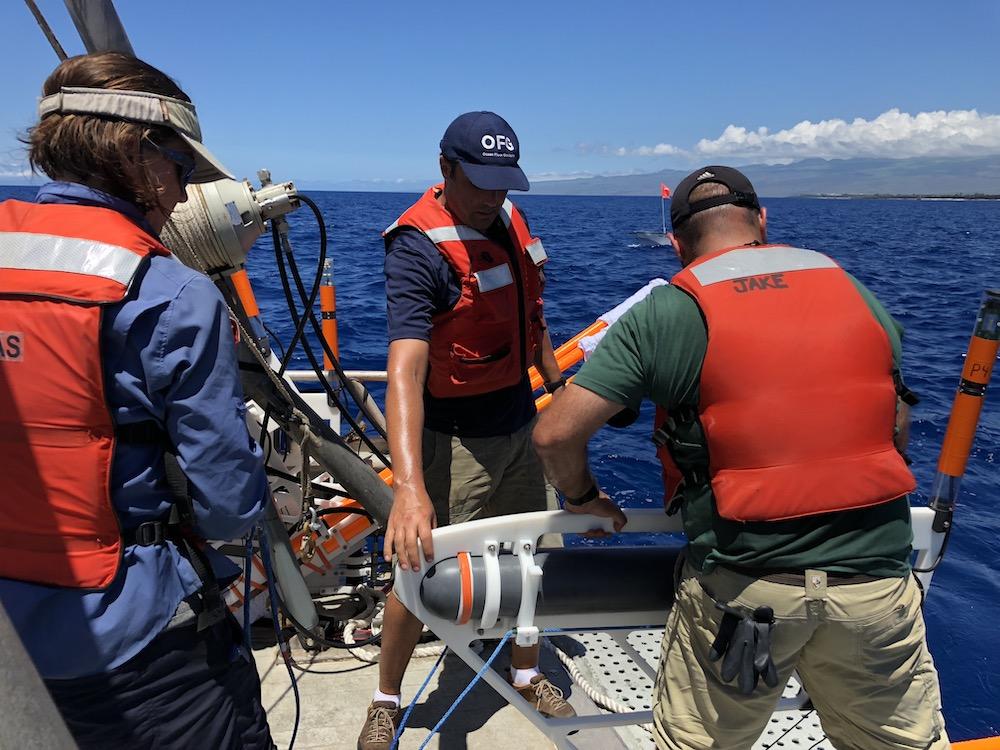 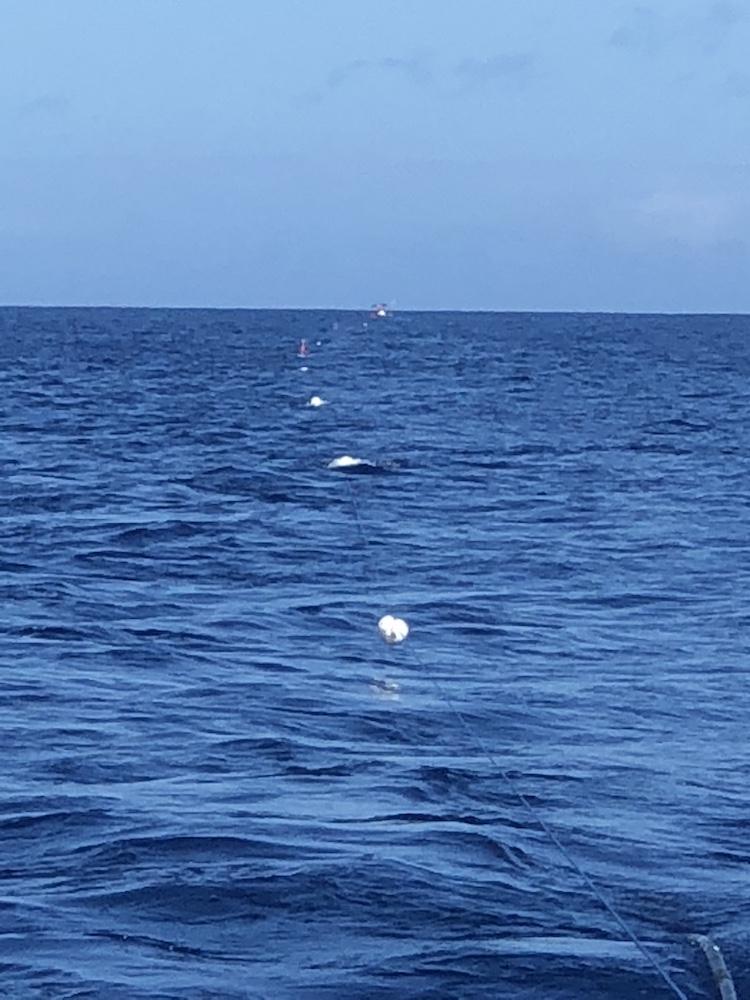 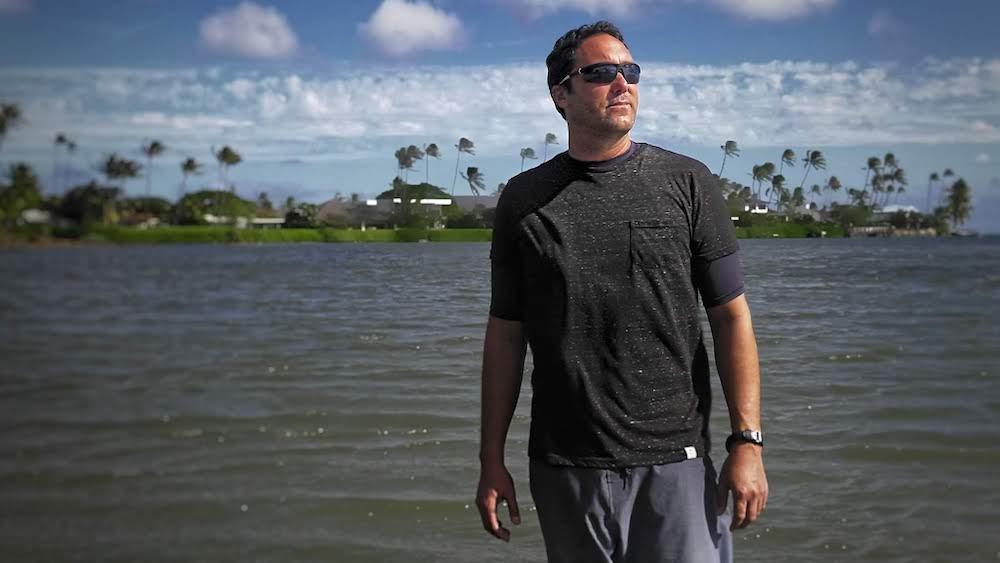 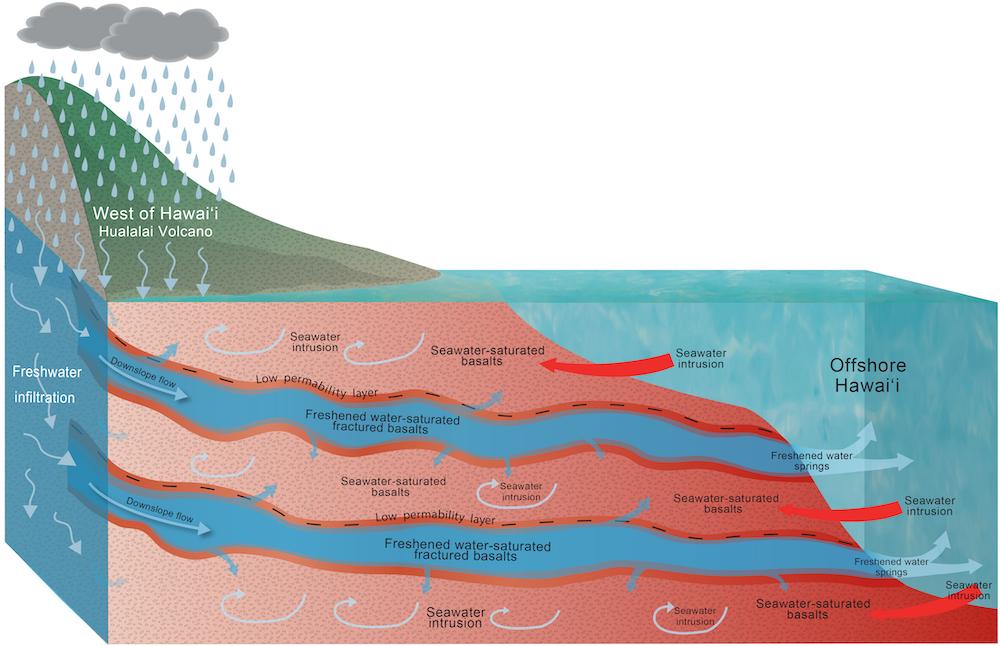 A study by the University of Hawai‘i showed that twice as much fresh water is stored offshore of Hawai‘i Island – more than previously thought. The recent findings mapped by UH researchers with Hawai‘i EPSCoR ‘Ike Wai project revealed an extensive reservoir of fresh water within the submarine southern flank of the Hualālai aquifer.

Substantial volumes of fresh water are transported from onshore to offshore submarine aquifers along the coast of Hawai‘i Island. This mechanism may provide alternative renewable resources of fresh water to volcanic islands worldwide.

“Their evidence for separate fresh water lenses, stacked one above the other, near the Kona coast of Hawai‘i, profoundly improves the prospects for sustainable development on volcanic islands,” said UH Mānoa School of Ocean and Earth Science and Technology (SOEST) Dean Brian Taylor.

Through the use of marine controlled-source electromagnetic imaging, the study revealed the onshore-to-offshore movement of fresh water through a multilayer formation of basalts embedded between layers of ash and soil, diverging from previous groundwater models of this area. Conducted as a part of the National Science Foundation-supported ‘Ike Wai project, research affiliate faculty Eric Attias led the marine geophysics campaign.

“Our findings provide a paradigm shift from the conventional hydrologic conceptual models that have been vastly used by multiple studies and water organizations in Hawai‘i and other volcanic islands to calculate sustainable yields and aquifer storage for the past 30 years,” said Attias. “We hope that our discovery will enhance future hydrologic models, and consequently, the availability of clean fresh water in volcanic islands.”

Co-author Steven Constable, a professor of geophysics at the Scripps Institution of Oceanography, who developed the controlled source electromagnetic system used in the project, said, “I have spent my entire career developing marine electromagnetic methods such as the one used here.  It is really gratifying to see the equipment being used for such an impactful and important application.  Electrical methods have long been used to study groundwater on land, and so it makes sense to extend the application offshore.”

Kerry Key, an associate professor at Columbia University who employs electromagnetic methods to image various oceanic Earth structures, who not involved in this study, said, “This new electromagnetic technique is a game-changing tool for cost-effective reconnaissance surveys to identify regions containing fresh water aquifers, prior to more expensive drilling efforts to directly sample the pore waters. It can also be used to map the lateral extent of any aquifers already identified in isolated boreholes.”

Donald Thomas, a geochemist with the Hawai‘i Institute of Geophysics and Planetology in SOEST who also worked on the study, said the findings confirm two-times the presence of much larger quantities of stored groundwater than previously thought.

Offshore fresh water systems similar to those flanking the Hualālai aquifer are suggested to be present for the island of O‘ahu, where the electromagnetic imaging technique has not yet been applied, but, if demonstrated, could provide an overall new concept to manage fresh water resources.

The study proposes that this newly discovered transport mechanism may be the governing mechanism in other volcanic islands. With offshore reservoirs considered more resilient to climate change-driven droughts, volcanic islands worldwide can potentially consider these resources in their water management strategies.